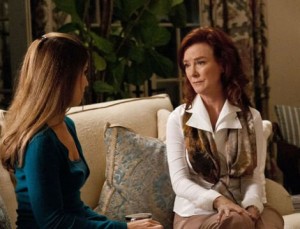 According to TV Guide, Devious Maids has cut three cast members ahead of its upcoming second season. Wole Parks, Brett Cullen, and Brianna Brown, who played Sam Alexander, Michael Stappord, and Taylor Stappord, respectively, will not be returning, with the reasoning being that Marisol has “graduated” from the Stappord home. Executive producer Sabrina Wind told the magazine that while Michael and Taylor won’t be regular characters going forward, they’re still in the fabric of the community and could pop up again in another capacity. No explanation was given for Parks being let go.

When Devious Maids picks up its second season, it’ll be three months following the events of the first season finale and Marisol will be engaged to a mysterious, wealthy widower named Nicholas (Mark Deklin) with a maid of his own (Joanna Adler). The central mystery of the season will be what exactly happened to Nicholas’ deceased wife, seeing as how what he tells Marisol and what she sees for herself around the house and hears around the neighborhood don’t exactly line up.

Even though the show will be saying goodbye to Michael, Sam, and Taylor, that doesn’t mean the Beverly Hills enclave it focuses on will feel empty, as there will be four new series regulars on Devious Maids next season. In addition to Deklin and Adler, the nighttime soap will be adding Dominic Adams as Tony, a bodyguard/chauffeur who is ex-special forces, and Colin Woodell as Ethan Sinclair, the pool boy son of Nicholas’ maid Opal.

The second season of Devious Maids is set to premiere Sunday, April 20th at 10:00 on Lifetime.

What do you think about the decision to do away with Sam and the Stappords? How do you think the show will explain away the absences? Which new character are you most looking forward to?