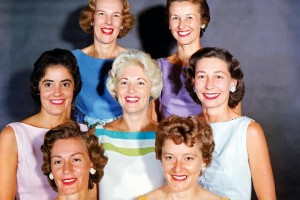 TVLine is reporting that ABC has given historical drama Astronaut Wives Club a 10-episode series order, with the series set to premiere this summer alongside the second season of Mistresses. Adapted for television by Stephanie Savage (Gossip Girl) and based on the Lily Koppel novel of the same name, Astronaut Wives Club tells the story of a group of women who support their astronaut husbands during the 1960s space race.

Astronaut Wives Club marks the latest new series order for ABC, which has picked up crime drama Secrets & Lies and an untitled David O. Russell soap in recent months. The order further boosts their summer scripted roster, which includes two Canadian imports (Rookie Blue and Motive) and Mistresses, and allows them to experiment with limited series in the summer following botched attempts in the fall. ABC hasn’t had the best luck with similar programming in the past, with fellow ’60s drama Pan Am flaming out early in the 2011-2012 season, and making Astronaut Wives Club a limited summer engagement will lessen pressure on the show to perform while hopefully giving a hand to marginally-rated Mistresses, whose renewal was in question for much of its debut season.

After the pickup of Astronaut Wives Club, ABC has 11 drama pilots in contention for a spot on the 2013-2014 schedule, including racially-themed American Crime; Exposed, about a tabloid reporter on the search for truth; and Sea of Fire, which has already cast the likes of Jennifer Carpenter and Jack Davenport. You can check out the pilots that ABC has ordered thus far here.