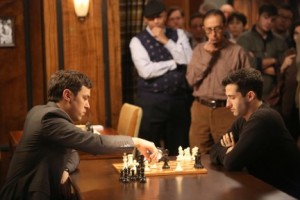 FOX has announced that Bones has been renewed for a 10th season, which will allow the venerable procedural to reach the 200 episode plateau that very few series, regardless of genre, ever hit.

“Over the course of nine seasons, Bones has grown from a hit crime procedural into a beloved pillar of our lineup that resonates with fans in a way that only the best of shows can,” said Reilly. “Our viewers have embraced Emily, David and the entire cast and characters of Bones as their very own, and I think they are going to love what Hart Hanson and Stephen Nathan have planned for Season 10!”

Additionally, FOX will move Bones back to Mondays beginning March 10th at 8:00, where it will slide in for Almost Human following the sci-fi cop drama’s first season finale the previous week. The network is using Bones as a way to give flailing The Following a boost after the Kevin Bacon drama plummeted in the ratings in the second episode of the reason; while a drop was to be expected in the episode proceeding the show’s NFL-fueled season premiere, the show lost over half its audience in the span of eight days. The second episode did air without a lead-in, though, and Bones should provide the stability to boost it into a third season.

The network will also premiere the next season of Kitchen Nightmares on Friday, February 28th at 8:00, meaning that moving Enlisted to 9:00 ultimately might not matter. Kitchen Nightmares is no slouch in the ratings and a reality series leading into a comedy could conceivably have a strong flow, but Bones is generally higher rated and could have given Enlisted the type of push it needs to get its ratings within shouting distance of renewal-ready. Without it, the military comedy’s chances have only become bleaker.

What have you thought of Bones this season? Where should FOX schedule it next season? Do you think Enlisted will be able to survive with Kitchen Nightmares as a lead-in?