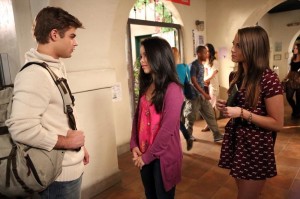 Mariana is in arguably the roughest place of all her siblings, be they foster or biological. Not only is she dealing with Callie, the girl she had begun thinking of as a sister, running away from home, she”s been forced to say goodbye to her best friend of many years, leaving her to deal with the complex emotions of being a teenager in a foster home alone. Which is why it both made sense and was especially sad that she allowed Kelsey to reach out to her; Mariana needed to have someone in her life, if only to feel the type of human connection she had been lacking, and yet, all Kelsey has done is try to throw her under the bus in order to have Chase all to herself.

On tonight”s episode of The Fosters, Kelsey resorts to even more extreme measures to secure Chase, as she airs out some of Mariana”s dirty laundry when she notices her friend getting closer to the guy online casino she likes. For once, Mariana had been made to feel special by the attention that Chase was showing her, attention that wasn”t even romantic in nature, and due to her own insecurity and pettiness, Kelsey felt the need to take that away and ruin any chances of Mariana making a new friend, let alone finding a boyfriend. However, Chase seems like a smart enough guy to see through Kelsey”s charade and understand that while she might be doing the absolute most in trying to get his attention, she”s not the one he should have his eye on, nor is she the one he should be spending time with, play or no play.

Elsewhere on The Fosters, Callie”s probation officer learns of her relationship with Brandon, while Lena and Stef take measures to keep the two apart, Jesus experiences hazing as he tries to bond with the wrestling team, and Jude makes preparations to leave the Foster home out of fear that Callie”s actions will get them both sent away.

How will Mariana react to Kelsey”s betrayal? What type of measures will Lena and Stef take to keep Callie and Brandon apart? Should Jesus continue on the wrestling team, despite the concerns of his mothers and the treatment he”ll have to endure?