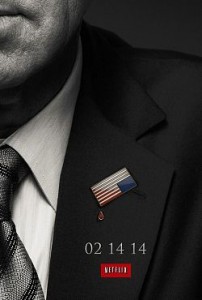 Netflix premieres the second season of its Emmy winning show House of Cards on Valentine’s Day. That’s the twist, as this February 14th will be all about political drama and corruption as House of Cards returns back!

And to keep the excitement going, Netflix has released a new batch of photographs from the new season. The pictures are a mixed bag. without saying anything about the season 2 episodes. We also get to see the entry of the newcomers on the show – David Clennon and Molly Parker. Netflix has kept the suspense alive by not disclosing the name of their characters, but by the look of the pictyre, they sure seem to have intense roles in this season.

Netflix is going to release all the 13 episodes of the second season of House of Cards in one go. Maintaining their mantra of non-stop viewing, Netflix strongly feels that streaming is the future of television. Well, we have to agree with them for the fact that their website is doing incredibly well, especially when Orange is the new black and house of cards were nominated for this year’s Golden Globes.

The show picks up from where season 1 ended and that is when Francis Underwood (Kevin Spacey) takes on to the position of the Vice President. Season 2 of House of Cards premieres on Friday, February 14th only on Netflix. Watch the trailer of the new season here and check out the new pictures below: