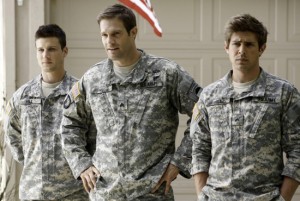 FOX has announced that military comedy Enlisted will be switching timeslots with Raising Hope beginning Friday, January 24th. While the Greg Garcia-created family comedy moves into the 9:30 slot that some of its episodes aired this fall, Enlisted will now air at 9:00 and immediately follow Bones, which has done some solid business on Fridays. The first Enlisted episode set to air at 9:00 finds Pete trying to distance himself from his brothers, while on the 9:30 Raising Hope, Burt and Virginia try to help Barney’s fledgling relationship with Maxine.

While the move will help Enlisted get sampled more than it was getting following Raising Hope, it might be two weeks too late, as the show needs every eyeball it can get in order to make it to a second season and the ceiling that it can now achieve has been lowered by delaying the move to 9:00. Often times, a show’s series premiere is its ratings high point, months of marketing and pre-season buzz culminating in a wave of sampling, and only in special circumstances can it build an audience out of a series premiere. Enlisted, which received a 0.6 in the 18-49 demo for its second episode, will likely have to add at least 67% to its current numbers to give itself a chance at another season; though it should receive a shot from airing after Bones, there’s no guarantee that enough of the procedural’s audience will find the show and stick with it for the remaining 11 episodes, all of which will air, per FOX’s TCA session last week.

What should help Enlisted is that it’s earned strong reviews and that no FOX comedy is doing especially great in L+SD ratings, with ratings leader New Girl staying around a 1.6-1.7 its past few airings. Given the ratings Friday Factor, the show might not have to catch Dads, Brooklyn Nine-Nine, and The Mindy Project in order to take a slot on the schedule next season, but financially, there would be no way for the show to return at the ratings level it would have gotten at 9:30. Although it has a tall task ahead of it in building an audience after two poorly-rated episodes, especially now that it’s going head-to-head with the likes of Shark Tank and Grimm, Enlisted now has something of a chance to turn its fortunes around.

Do you think Enlisted moving to 9:00 will give it a chance at renewal? What ratings level would the show have to achieve in order to get a second season? Why would FOX place a comedy that garnered strong pre-season buzz in a slot where it couldn’t get a proper launch?