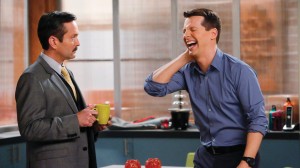 NBC will attempt to give their Thursday nights a jolt by flipping its 9:00 comedies this coming Thursday. For one week, the network will air The Michael J. Fox Show at 9:00 followed by Sean Saves the World at 9:30; with the former earning series low ratings this past Thursday and neither looking like they’ll be healthy enough to finish the season respectably, now seems like time to make a move, if only to stop the night from becoming even more of a problem.

Before the season began, it seemed like an obvious conclusion that The Michael J. Fox Show would inherit the 9:00 slot from The Office, as the show was given an off-cycle 22-episode straight-to-series order and 9:00 would be the biggest and best showcase for Fox’s return to the network after decades away. However, NBC opted to use another NBC veteran in Sean Hayes for the 9:00 slot, possibly as a way to counterprogram CBS attempting single-camera comedy with The Crazy Ones. Following decent debuts, both soon sank and even helped The CW nearly tie NBC from 8:00-10:00 during one fall Thursday, with Sean‘s renewal chances crippled following a sub-22 episode order.

The next episode of The Michael J. Fox Show, which should make for a more apt lead-out for Parks and Recreation, will find Mike battling Susan for a chance to cover the Winter Olympics, Eve entering a beauty contest ironically before her competitive side takes over, and Leigh becoming convinced that the ghost in her apartment is interesting in her. Meanwhile, on Sean Saves the World, Liz and Lorna conspire to sabotage Sean’s date with his pretentious ex-boyfriend and Max convinces Hunter to help house his flock of birds.

Have you been watching The Michael J. Fox Show or Sean Saves the World? Do you think this experiment will help either in the ratings? Should NBC have had the two in this arrangement from the beginning of the season?