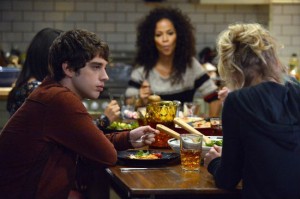 While Callie was understandably worried about being thrown back into the foster system once Lena and Stef found out about the kiss with Brandon, one thing she might not have considered is how the encounter would impact her probation; granted, she didn’t run away from Wyatt thinking that she was going to be picked up by the police, but now that she has, she’s facing potential difficulties in getting placed back with Lena and Stef (and released from the facility she’s being held in) due to said kiss. There was already no guarantee that she would even want to be back with the Fosters after the way she left, since she thinks that her presence would only make things more difficult for Jude, and now that it looks like she could relent and want to be back home, circumstances might get in the way and she could be on the outside looking in on what would be a great situation for her.

Listed below are the dates, titles, and descriptions of the next five episodes of The Fosters.

Monday, February 3rd- “Family Day”
During a family visit, a miscommunication makes things awkward between Brandon and Callie. Rita informs Stef and Lena that Callie’s plans for the future may not include them. But when a secret Callie shares with one of her housemates leads to tragedy, Callie just might reconsider her situation. Stef and Lena talk to Jude about moving forward with his adoption, and he must decide if he wants to be part of the Foster family, even if Callie does not. A gesture from Frank catches Stef and Lena off guard, and Lena attempts to convince Stef that it’s time to make amends.

Monday, February 10th – “Padre”
Recent events bring up painful memories for Callie and Jude and make Callie question what is most important to her. Stef is flustered by a discovery about Lena and Mike is troubled by new developments in the shooting investigation. Meanwhile, Jesus’ long distance relationship with Lexi is complicated by his growing bond with his wrestling teammate, Emma.

Monday, February 17th – “Us Against the World”
Callie makes a life-changing leap in order to better her future and earn back the trust of her loved ones. Brandon makes a move of his own, much to Callie’s disappointment. Stef is called to testify in Mike’s case and is faced with a decision that could mean losing her job. Meanwhile, Jude unravels a mysterious message, and Mariana makes a bold move to win Chase’s attention.