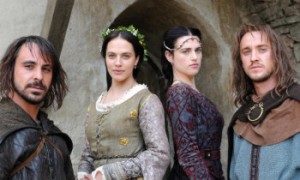 The CW has announced that they’ve acquired four-part historical miniseries Labyrinth for premiere at a date to be named later. Starring the likes of Tom Felton (Harry Potter and the Goblet of Fire), Jessica Brown-Findlay (Downton Abbey), Sebastian Stan (Political Animals), and John Hurt (V for Vendetta), Labyrinth will leap back and forth between modern and medieval France and tell the story of two women in search of the Holy Grail. In 1209, Alais (Brown-Findlay) receives a book from her father that he claims tells the whereabouts of the Grail, a book that she may not be able to decipher but that she fiercely protects, while eight centuries later, archaeological volunteer Alice (Vanessa Kirby) finds two skeletons and a link to her past in a forgotten cave.

Later this year, two new reality series will premiere on The CW. Half-hour Barber Battle, to be hosted by Cedric the Entertainer, will spend 10 episodes pitting some of the best barbers in the country against one another to see who can produce the best cuts. There will be weekly winners, though judges, locations, prizes, and contestants have yet to be revealed. Meanwhile, hour-long Penn & Teller: Fool Us features aspiring magicians doing their best to trick Penn & Teller, who only see the trick once before having to immediately work it out; anyone who succeeds will win the right to perform with Penn & Teller in their show at the Rio Hotel & Casino in Las Vegas. The show is set to be hosted by Jonathan Ross.

Coming to The CW’s digital platform CW Seed is a digital spinoff of Veronica Mars. Set to consist of six to eight 10 minute segments, the series, which has yet to be titled, will follow Ryan Hansen as a version of himself tries to put together a Dick Casablancas spinoff of Veronica Mars. Creator Rob Thomas is on board the project, which will be the second major Veronica Mars project of the year following the release of the Kickstarter-funded theatrical movie in March. No premiere date for the series has been released.

You can check out a trailer for Labyrinth below.