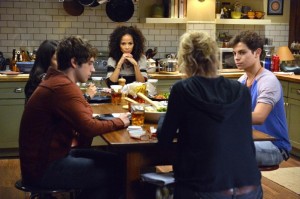 Lena and Stef were left reeling when they found out that Callie had ran away from home, seemingly without reason. From their perspective, things with the family were going quite well, well enough to where they felt comfortable asking Callie and Jude if they were okay with the idea of being adopted into the Foster’s family. However, for a family that has been such a point about being open and honest with one another, the real explanation for Callie running away has been a secret kept by Jude and Brandon, partially out of fear of Lena and Stef’s reaction and partially due to not knowing the true reason themselves. Both Brandon and Jude believe they were responsible for driving Callie away from the house, but it’s one of them in particular who decides to fall on the grenade for the good of them all.

On the next episode of The Fosters, Brandon comes clean to Lena and Stef about the real reason that Callie decided to leave without telling anyone and has openly rejected the idea of coming back into their home. As much grief as he’ll have to deal with from his mothers, it’s ultimately going to be worth it to protect Jude’s status in the house and show Lena and Stef that it wasn’t that Callie was ungrateful or not able to be saved; it’s that she was so terrified about ruining things for Jude and falling back into the system once again that she felt she would be better off on her own. Knowing what they know now, Lena and Stef will be able to approach Callie in a different way than what they did when they initially found her, but is she going to be any closer to wanting to come home, assuming her court hearing goes well?

Elsewhere on The Fosters, Mariana gets approached to join the school production of The Glass Menagerie, while Jesus looks for a way to combat the concerning side effects of his medications, leading him to try out for the wrestling team.

The Fosters airs Mondays at 9:00 on ABC Family. You can check out a recap of the winter premiere here.

How will Lena and Stef react to Brandon confessing to kissing Callie? With a senior boy being the one to bring up the upcoming production, should Mariana throw herself into the school play? Is participating in contact sport the right way for Jesus to relieve his aggression?