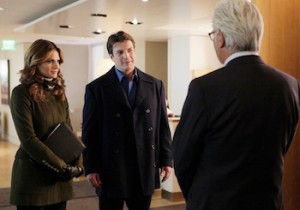 Castle was firing on all cylinders Monday night! Terence Paul Winter I bow down to you. You nailed it! “Deep Cover” was intense, had many surprises and had so many great lines and Caskett moments my cheeks hurt from smiling. This episode definitely ranks as one of my favourites this season, hands down!

Castle was on fire from the get go. Castle and Beckett’s wedding date talk was perfection! Kate almost stole that scene by grabbing Castle’s butt but Martha came swooping in with this amazing line.

“Don’t wait! Hell, just go down to city hall right now! You love each other, stop talking about it, just do it!”

Thank you Martha! The more I think about it though, as much as I’d love to see Castle and Beckett get married right away, I really want to see a really romantic ceremony with Kate wearing the most beautiful dress and Castle grinning from ear to ear while Kate’s father walks her down the aisle.

I don’t know about you, but if someone called me and said, “lives are at stake, don’t react” I’m going to react. Especially if that person was your estranged CIA father. I’m not going to lie, I freaked out a little bit at the fact that Papa Castle was posing as Anderson Cross. Kate thought she met Cross before. You had to know she wasn’t going to let that go.

Castle was definitely pre-occupied when him and Beckett went to see the victim, Ted after Lanie called with some news. Ted had a coin imprinted on the bottom of his foot. It turned out to be an Iranian Rial, a coin worth less than a penny. Castle didn’t even have any crazy theories to offer up. A flare went up and Beckett caught on that something was definitely up with him. Castle received a text from his father telling him to meet him at the park. Castle rattled, made up an excuse about going to see his publisher or something. He was rambling on as he left. Not smooth Castle. I would imagine Kate was getting pretty suspicious about his behaviour. I know I would be.

At the park, Castle’s father wanted to know how much he learned about their victim Ted. “There’s a storm coming, a lot more people are going to die.” I was inclined to believe Castle’s father. At the precinct the group got their hands on some surveillance footage. Good news for them, Castle’s father was caught on a surveillance camera. Castle sticking up for Anderson Cross definitely set off alarms for Beckett. Every trace of the company Cross set up had disappeared. Beckett was now extremely determined to find Cross. I love how the writers go back to old episodes. Kate being Kate found the old sketch from Alexis’ kidnapping. That same sketch of Castle’s father. Beckett found out Cross was a former CIA operative and was disowned for an unauthorized assassination. He was sentenced to life, broke out and killed 3 guards. All of this sounded really bad for Castle’s father but I’m always inclined to believe things are definitely not what they seem.

After Castle’s father didn’t show up to the park to meet him, he went back to the loft and spilled all to Martha about his father. Martha, always one with great advice told him to “lean on the people you trust. Call Katherine, tell her what’s going on.” Before Castle got the chance to do just that, his father showed up to the loft. I’m not going to defend the guy, but he had a pretty good reason for not showing up. He got shot!

Things I never thought I’d see: Castle and Martha performing surgery on his father to take out a bullet. I have to say, I really love James Brolin playing Castle’s dad. How badass was Castle’s father though? The man stitched himself up! Things got really interesting when Kate showed up to the loft. Castle was forced to reveal all. “He’s your future father in law.” Kate’s face was priceless. I really wish Castle would have told Kate the truth earlier. Castle put Kate in the worst possible position. Castle’s father ended up telling Beckett everything. At that point, he really didn’t have any other choice. There was a breach and they had to find the mole and recover the files. Daddy-o had recruited Ted to find the list. Uh-oh moment: Castle’s father revealed that Castle told him about the case. Kate was not pleased.

There were many shining stars in this episode, and I’m happy to say Susan Sullivan was one of them. We got such a sweet scene with Martha and daddy dearest. They reminisced about that special night and “My Funny Valentine.” I really miss Martha singing and performing. I hope we get to see more of that side of Martha this season. The moment Castle’s father asked Martha for juice, I knew he was going to take off. What they shared was in the past and for everyone’s safety it needed to stay there.

I’m not sure about anyone else, but I can’t help but smile every time Castle and Beckett are at a library. It’s their place. Things didn’t go smoothly and they figured out they were being set up. The download wasn’t a CIA list, it was a phonebook. Gemini posed as a fan of Castle’s and held him at gunpoint and took him. Castle’s father was way too clever and tracked them down with the GPS locator he slipped into Castle’s pocket and killed Gemini right in front of Castle. I can’t say I was all that surprised. Castle’s father doesn’t play around.

Castle’s father let Castle and Beckett walk into a trap. He was just doing what he had to do, simple as that. When Castle brought Beckett back down, Gemini’s body was gone, as was Castle’s father. All that was left was Gemini’s gun. The same gun that killed Ted. Gemini killed Ted and was brought to justice.

Castle and Beckett figured out Castle’s father did all of that just so they would catch the case and solve the crime and his father could work Castle for information. I agreed with Kate, maybe he wanted to insert himself in Castle’s life again. Quite a bold statement made by Castle, that his father wasn’t his family, Kate was Castle’s family now and Castle made a decision regarding the date of their wedding. A September wedding it will be! Castle fandom rejoice!

As much as I love when an episode ends with Castle and Beckett, I love when we get a last scene with Castle and Martha. This whole episode they had been great together, why not end it with a sweet moment between them. Martha disagreed with Castle’s statement that his father was never worth her time. His father gave Martha the greatest gift of her life. He gave her Castle and he also gave her closure. Will this be the last we see of Castle’s father? Only time will tell.

What did you guys think of the episode? Did you love it as much as I did? Are you as ecstatic that Castle and Beckett have finally set a date for their wedding? I know I am! Sound off below!

Kate: “September! It’s not too hot, it’s not too cold. It’s right in the goldilocks zone.”

Kate: “I want to be flexible”  Castle: “You already are flexible.”

Kate: “Is it me or does she look a lot like Esposito?”  Ryan: “I expected that from jackass, but not from you.”

Lanie: “You two creep me out when you do that shared brain thing.”

Castle’s father: “I let my guard down people die.”

Castle’s father: “I may not be good at it, but I’m still your father.”

Castle’s father: Do me a favour, don’t make my nose light up.”

Kate: “Don’t you have backup” Castle’s father: “I am the backup.”

Martha: “Forgive me but your promises don’t mean much.”