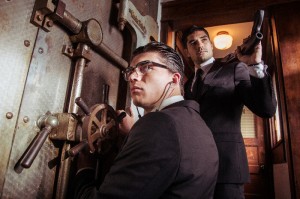 El Rey Network has announced that their first original scripted series, an adaptation of 1996 film From Dusk Till Dawn, will be premiering Tuesday, March 11th at 9:00. Created by director and network founder Robert Rodriguez, who directed the original film and will direct three of the first four episodes, From Dusk Till Dawn: The Series centers on a bank robber (D.J. Cotrona) and his unpredictable brother (Zane Holtz) on the run following a deadly heist. The two make it to Mexico and take a family hostage in order to get control of their RV, but soon enough, they find themselves in a strip club populated by vampires.

From Dusk Till Dawn: The Series is said to deepen and expand the storyline presented in the original film, adding new characters and delving into the Mesoamerican mythology behind the creatures inside the club. Emmy winner Greg Nicotero will be in charge of make-up effects for the series, while Joe Menendez (Imagination Movers, Big Time Rush) and Eduardo Sanchez (The Blair Witch Project, V/H/S/2) are among those slated to direct episodes. Nikita‘s Carlos Coto will act as showrunner for the 10-episode first season.

You can check out a trailer for the original film, as well as two clips, below. To learn more about El Rey Network, which launched the week of December 15th, get a look at their website here.

Will you be watching From Dusk Till Dawn: The Series? How do you think the series will differ from the film? What other films would you like to see made into television series?