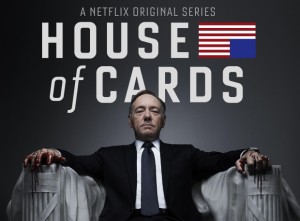 House of Cards is coming back for another season which will showcase 13 new episodes. The second season with premier on February 14th and Netflix just released the official trailer of the brand new season. The trailer indeed has left the fans of House of Cards really excited and waiting eagerly for the second week of February.

For those who are not aware, House of Cards is the network’s original series and the has a huge fan following which is proved by the fact that the exclusive 2-minute trailer has almost 9,00,000 views in less than a day of its upload.

House of Cards is a drama series which is produced by Beau Willimon. The first season of this series also constituted of 13 episodes and was a huge hit. This trailer gives enough content for the fans to keep them guessing what lies ahead in the brand new season. Watch the trailer below and share your views with us:

What do you think of this brand new trailer of the drama series House of Cards? What will happen after Frank gets into power? Will he make a lot of enemies really fast and his life is going to change completely? What secrets will get exposed?