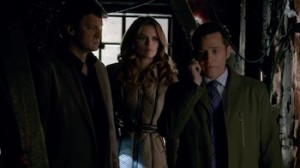 Castle started off 2014 with quite a bang. Everyone delivered the goods in “Under Fire” and Monday night’s episode provided us with the most badass explosion this series has ever done. The entire time Ryan and Esposito were trapped I was on edge. It was a miracle they survived that explosion. I know… they are main characters and they weren’t going to get killed off… but still. The episode was emotional, intense, and I loved every minute of it.

Seamus and Juliana Dever stole the show for me. Kevin and Jenny made me laugh and they made me cry. They were constantly calling each other to test their system. Jenny was past her due date and could give birth at any moment. It was so heart wrenching having to watch Beckett tell Jenny what happened to Ryan. Here they were awaiting the birth of their little one and Ryan gets trapped in an explosion. Stana was great in this episode. The look on Beckett’s face at the sight of the fire was heart breaking. Stana definitely deserves all the awards. Stana doesn’t even need to say a word. She says it all in her facial expressions.

I did find Castle quite subdued with his theories about the case, which was perfectly fine for this episode. I love Castle and his crazy theories but this episode didn’t really call for it. Nathan’s performance in this episode was great. I also thought Penny Johnson Jerald was fantastic in this episode. I loved Captain Gates addressing the rest of the precinct. I loved seeing everyone band together. Bad ass Gates emerged in the interrogation room and I loved every minute of it.  I had to smile at the thought of how far Gates and Castle have come. Not too long ago she couldn’t stand him and here they were theorizing together. I loved it!

I had the biggest smile on my face when Mr. tech Ryan was able to get through to Beckett using the phone he saw in the rubble. (Land line!) My smile turned to sadness though when Ryan was talking to Jenny while she was in the ambulance about to give birth. It was just so heartbreaking. The look between Lanie and Beckett and Beckett shaking her head brought tears to my eyes.  Tamala Jones shined in this episode. When she rushed over to the warehouse knowing Javier was trapped broke my heart. As if my heart wasn’t hurting enough, Castle comforting Beckett set my heart aflutter. The waterworks really started to pour out of me when Jenny said to Kevin they needed to name the baby together. I know sometimes real life couple’s chemistry doesn’t translate on screen, but Seamus and Juliana definitely shine on screen together. I did have a little chuckle when Ryan wanted to name the baby Javier.

The look of joy on everyone’s face as Ryan and Esposito emerged from the building brought more tears to my eyes. Happy tears though. (Finally!) The tears didn’t stop as Ryan saw Jenny and his new daughter, Sarah Grace. The look on Ryan’s face told me he’s totally ready to become a dad. Beckett, Castle, Javier, and Lanie standing by the ambulance watching over Ryan, Jenny, and the baby was just perfection. They are definitely a family. What a great episode to start the new year. I cannot wait to see what Marlowe & Co. have in store for us for the second half of the season. Next week looks amazing. Castle’s dad is back! Bring on the Brolin.

What did you guys think of the episode? How adorable was it that Ryan wanted to name the baby Javier if it was a boy? Did you guys guess that the arsonist that killed Blake McCann was Mark Kimball the building inspector? I sure didn’t. Sound off below!

Castle: “Pick a date for my wedding? I was planning on bringing her.”

Castle: “The actual term is pyrophilia, for the proof that the internet has something for everyone.”

Beckett: “I’m not going to ask how you knew that.”

Beckett: “Can you not call him The Phantom. Just sounds… silly.”

Castle: “Sillier than The Arsonist? That starts with ‘ars’?”

*Seamus tweeted that the “I’m marrying him” line was ad-libbed by Stana. PERFECTION!