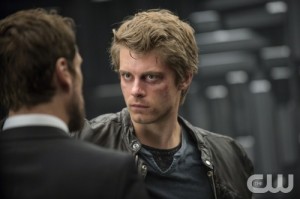 TV Guide Network has announced that the first three Saturdays in January will see marathons of The Tomorrow People, The Originals, and Reign, with every episode of each new CW series set to air. The Tomorrow People is set to have its first nine episodes encored on Saturday, January 4th beginning at 2:00 p.m., the same time that the marathons of The Originals (January 11th) and Reign (January 18th) will begin.

The move is a way to get each new fall show sampled and bolster their live ratings as they all head into the second half of their seasons. As broadcast networks don’t have the ability to show weekly/regular repeats of their shows, unlike cable which has built audiences for several modest performers this way, reaching out to either another network under the same umbrella or a fledging network looking to draw eyes is about the best way to offer viewers the chance to catch up or dive in head first. It’s not a wholly unusual practice, with the likes of ABC reairing the first half of Nashville’s debut season on CMT, and one that could help each show stave off annual spring ratings drops. While The Originals has established itself as a major player for The CW and doesn’t necessarily need the exposure, both Reign and The Tomorrow People have been more marginal performers and getting sampled by the right amount of people could be the difference between a second season and cancellation.

The Tomorrow People returns Wednesday, January 15th at 9:00 on The CW, while The Originals comes back from hiatus a day prior at 8:00 with Reign not scheduled to resume its season until Thursday, January 23rd. You can get a look at The CW’s midseason plans here, as well as a full list of midseason premiere and return dates here.

Do you think that the catch up marathons will help The CW’s freshmen crop in the ratings when they return from hiatus? How many of the new fall shows are you expecting to make it to a second season? Would you like to see more networks offer television marathons of their new shows as a way of getting people on board?