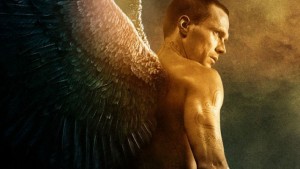 Syfy has announced that post-apocalyptic action drama Dominion has been ordered to series for a 2014 debut, its pilot directed by Legion co-writer Scott Spencer and written by Vaun Wilmott (Sons of Anarchy).

Based on 2010 film Legion and set in the year 25 A.E., Dominion centers on the aftermath of a war between an army of lower angels led by archangel Gabriel and mankind, the latter aided by fellow archangel Michael turning against his own kind. Newly fortified cities, originally designed to protect the human survivors, experience political upheaval wrought with instability as there’s a lot of power up in the air and the direction of the country could be decided by who seizes control of the major cities. Dominion will follow a rebellious young soldier caught in the middle of the conflict between the angels and mankind and how he manages to navigate the tensely dangerous reality that he’s forced to deal with. The series stars Christopher Egan (Kings), Anthony Stewart Head (Buffy the Vampire Slayer), Alan Dale (Lost), Tom Wisdom (300), and Roxanne McKee (Game of Thrones).

Dominion joins a scripted slate that includes Being Human, Continuum, Lost Girl, Helix, Haven, Defiance, and Warehouse 13. There’s a chance it’s not the only pilot picked up by Syfy, though, as there’s still the network’s 12 Monkeys adaptation and Bryan Fuller’s High Moon in consideration.

Does Dominion sound like something you would watch? Will the series fit in with the rest of Syfy’s scripted offerings? What other Syfy series should the show be paired with when it debuts?