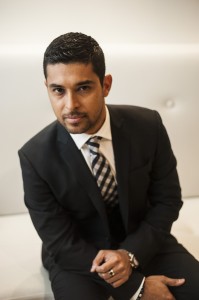 El Rey Network has announced that That ’70s Show alum Wilmer Valderrama has signed on for a role in Robert Rodriguez’s From Dusk Till Dawn: The Series. He’s set to portray enigmatic crime lord Carlos in the supernatural crime drama, which will bow in early 2014.

Based on the 1996 film that starred George Clooney, Juliette Lewis, and Quentin Tarrantino, From Dusk Till Dawn: The Series tells the story of a bank robber and his brother who are wanted by the FBI and Texas Rangers following a botched robbery that left more than one person dead. The two take a minister and his family hostage with the hopes of using their RV to make it to Mexico and out of the reach of the American judicial system, but they end up in a strip club populated by vampires. If the group manages to make it to sunrise, they’ll get out of the club with the lives, but that’s easier said than done. The series will reportedly add new characters to the film’s mythology, in addition to delving into the Mesoamerican origins of the club creatures and deepening the tone of the film it’s based on.

El Rey Network is scheduled to debut nationally next month. You can check out a trailer for the film the television series will be based on below.