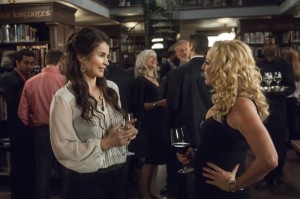 The relationship between Wendy and Joanna has been tumultuous at best, but ever since the two were reunited following a hundred year estrangement, things have noticeably been on the upswing. They’re mended fences due to needing one another in order to defeat the shifter and while Joanna had to learn to be more open about magic with the girls, Wendy forced herself to grow up a little and make better decisions than she had been making, something expedited by her being on her last life. But all the progress that they’ve made is threatened when Wendy learns that Joanna has the key that the shifter has been terrorizing them over.

On the next episode of Witches of East End, the peace between the Beauchamp sisters is over when the key is discovered. Since Wendy lost her second-to-last life over the whereabouts of the key, she blames Joanna for the position she’s in right now, having to be extra careful not to trip up and lose her final life. But the conflict isn’t another silent treatment from one to the other or a war of words that gets solved fairly respectfully. Things take a violent turn after Wendy wraps the key around her arm and could lead one of the Beauchamps to be put out of commission for good – if, that is, this Wendy is actually Wendy Beauchamp and not the shifter. Should the Wendy who threatens to kill Joanna be the real Wendy, Joanna, Ingrid, and Freya will have to quickly find a spell that will counteract whatever Wendy’s under before one of them does something that they’ll end up regretting later.

Elsewhere on Witches of East End, Ingrid suspects that Mike may have ulterior motives for being in East End, while the shifter targets Freya.

Why do you think Joanna hid the key from Wendy in the first place? How will the shifter target Freya now that it’s already struck against Wendy and Joanna? When will we learn why Mike is really in East End?