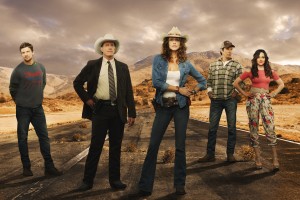 ABC has finalized its midseason schedule by revealing the premiere dates for several new and returning series, as well as major time slot change. The latter centers on Revenge, which has struggled this season at 9:00 in the face of brutal competition and the perception of a sophomore slump yet to wear off; rather than keeping it in the same time slot and allowing it to continue to die, ABC has pushed the nighttime soap back at hour to 10:00. Beginning Sunday, March 9th, Revenge will occupy the 10:00 slot and drama Resurrection, which has a similar concept to Sundance’s The Returned, moves ahead an hour to 9:00.

Thursday, January 2nd sees the second season of cooking competition The Taste take over for The Quest, which was booted to summer, at 8:00 and limited series The Assets assume Scandal‘s 10:00 slot for eight episodes. The Assets is based on the book Circle of Treason: A CIA Account of Traitor Aldrich Ames and the Men He Betrayed by retired CIA officers Sandra Grimes and Jeanne Vertefeuille. While the next season of The Bachelor premieres Monday, January 6th at 8:00, Killer Women has been slated to debut Tuesday, January 7th at 10:00, taking over a slot that saw Lucky 7 become the first cancellation of the season last month. The series stars Tricia Helfer as a divorced former beauty queen who rises to the top of the Texas Rangers.

Third season comedy Suburgatory returns to Wednesdays on January 15th, when it will take over Back in the Game‘s 8:30 slot. The series is said to have 13 episodes this season following two seasons of being one of the more promising comedies on the network. The ABC Wednesday lineup will also see the debut of Mixology on February 26th at 9:30 when it assumes the post-Modern Family time slot from Super Fun Night. Starring the likes of Vanessa Lengies, Sarah Bolger, and Blake Lee, Mixology takes course over the span of one night at a Manhattan bar. Kyle Killen drama Mind Games, which stars Christian Slater and Steve Zahn, is set to be the final premiere of ABC’s season, picking up the Tuesdays at 10:00 slot from Killer Women beginning March 11th.

The only midseason series that wasn’t scheduled was The Black Box and it seems like that could end up moving to summer unless one of the midseason dramas stumbles or the network wants to replace something like Once Upon a Time in Wonderland. Plans for what will replace Nashville during the country music drama’s planned hiatus have yet to be revealed, but with Black Box having 13 episodes, it doesn’t fit there. Also yet to be released is how ABC plans to handle Sundays between January and the beginning of March with Revenge and Once Upon a Time heading for hiatus soon.

What do you think about ABC’s midseason schedule? Did they make the right choice in moving Revenge back? Which ABC midseason shows will you be watching?