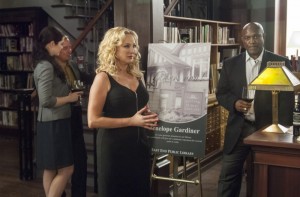 Wendy sits in the middle of a circle of pink powder, burns on her arms and Ingrid standing above her. Ingrid then dabs some type of liquid from a cup in her hand onto her fingers and reaches his hand in Wendy’s chest cavity.

Freya has another dream about Killian, made all the more unusual by the fact that she never thinks about him during the day. But this time, it’s not just dangerous to her state of mind and sleeping schedule, since Dash heard her talking/moaning in her sleep; he couldn’t make out what was being said, though. he promises to listen closer next time. To ensure that this never happens again, Freya looks in the grimoire for a spell on dream control and Ingrid helps her find one that involves a lock of hair, ginger, and a certain type of seed. She confesses to having kissed Killian at the engagement party, Ingrid withholding her judgment after everything the two have went through, and Wendy comes into the room, sending Ingrid flying up the stairs as she’s still avoiding her aunt. The wall of Ramus Mortium has been eradicated from the catacombs of Fair Haven thanks to Wendy and Joanna, but Wendy won’t read Freya’s tarot cards since there’s no guarantee that what it says will be positive.

At the library, Ingrid shows off a little bit of that inner darkness when a rude, demanding man comes in with a list of books and a sour attitude. The two get into an argument that’s broken up by Hudson. just as Freya arrives at the Bent Elbow and begins talking to Killian about an event of Penelope’s that will take place at the library that evening. She bullies her way into getting a chance to cut Dash’s hair and just as things are going like the dream she had, Amy walks in, interrupting what could have been another kiss between the two. Freya manages to get the hair she cut in the bottle she brought; she performs a spell and chugs down the blue liquid that appears. Later, Joanna runs into Ingrid at home and learns that her daughter is still confused about everything that she lived through recently. She’s also found out that neither she nor Freya ever live past a certain point and though Joanna assures her that this life is different and that this is the longest they’ve survived, she advises her to make every day count.

The shifter heads to the graveyard and pours smoke on the grave of 1906-Ingrid, watching as it spreads and a hand pokes through the dirt. After revealing that she’s not Joanna but Penelope, who 1906-Ingrid knew as Athena, the shifter tells 1906-Ingrid that she has at most another day or two left on this Earth and that now is her opportunity to get revenge on Wendy for what happened at the apothecary. Wendy stole a key from Archibald, the serpes clavem (golden snake), and that if 1906-Ingrid can find it and get it back, she has free reign to kill Wendy. Wendy hears the same “make the most out of every moment” spiel from Joanna that Ingrid got and uses that as motivation to go back after Leo, who she finds in the middle of a field doing something for work. She apologizes and explains that she wants to get to the bottom of the spark that was between them; after some initial resistance to the idea of giving her another chance, he agrees to meet her for lunch, just as 1906-Ingrid watches on.

While at the library for Penelope’s event, Ingrid almost gets sexually assaulted by a man named George, only the man she had the argument with earlier steps in and scares him off. Freya learns that Dash is going to a medical 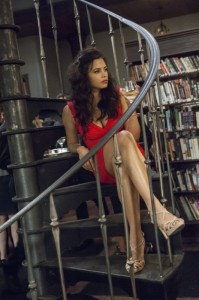 conference in London and that he wants her to come, too, as a prelude to their eventual honeymoon. Though excited, she later finds Killian and pulls him away from Amy to tell him that she has a feeling that something bad’s going to happen. Talk turns to their kiss and this time, Dash overhears, though he doesn’t make it known. There’s a knock on the door over at Leo’s and it turns out to be 1906-Ingrid looking for Wendy. She says that Joanna is hurt from a round of dark magic with the shifter and that Wendy has to come now, so Wendy leaves her bag and heads off with the girl she thinks is her niece. However, when 1906-Ingrid calls Joanna “mother,” Wendy knows something’s not right and ends up being launched down half a flight of stairs.

Wendy then gets taken to what looks like a boiler room, where she’s put on a chair, spelled into being unable to move, and set in the middle of a circle of pink powder. Ingrid reveals herself as the Ingrid from 1906 who Wendy killed and uses some sort of liquid to burn both of Wendy’s arms. 2013 Ingrid has another run-in with the man from the library (named Mike) and it’s on much better terms than their first encounter, though he has a map of Fair Haven in his possession. While Dash bursts into the Bent Elbow and punches Killian in the face before running right back out, Leo stops by Joanna’s to return Wendy’s bag and Joanna does a locator spell to pinpoint where her sister is. She bursts in right as 1906-Ingrid put her hand in Wendy’s chest and kills the reanimated version of her daughter, only Wendy is already dead.

Fortunately, Wendy comes back alive later at home and informs Ingrid who her killer was. Ingrid feels guilty for what happened and worried that this is the type of person she was capable of becoming, but Wendy assures her that she’s her favorite Ingrid and the two hug. Although an irate Dash has already left for London, Freya did manage to kick Killian out of her dreams thanks to the spell and get Joanna to agree to do her tarot cards for her. The result? The choice that she makes between Killian and Dash will decide her fate. One of them is the trickster, her destroyer; one of them, the emperor, her soul mate. But she doesn’t know which, since the trickster can easily masquerade as being the emperor, and until she makes her choice, she won’t know.

Wendy joins Joanna for a drink and tells her that 1906-Ingrid wanted the key, which the latter swears she watched get destroyed. There’s no danger that the portal it can open will fall into the wrong hands. While Wendy’s necklace turns red, meaning that she’s on her last life, Joanna waits until later to dig up a box that was buried in the yard.

A box that contains the key.

Additional thoughts and observations:
-Another very good episode. The only (real) criticism I have about it is the in media res opening was unnecessary, since we knew that there was no way the Ingrid we knew would do that to Wendy. Openings like that only work if there’s some element of plausibility in the craziness, because if there’s not, it just reads gimmicky.
-If Wendy dies this season, I’m going on strike or something. Madchen Amick has been my favorite part of this show since day one and it would not be the same without her, so hopefully sometime before the final, we get a spell that grants her extra lives or she does something so heroic that it earns her extra lives. Granted, the only way I could see the latter happening is if this show had a council, but I might have to write in a council so they can rule in Wendy’s favor should she die.
-I love how they revealed who the shifter was. It wasn’t in a finale, it wasn’t in a final scene of an episode – it was just a random moment and that makes me more confident that the show will continue to be this well-paced for its (currently hypothetical) second season. This is the type of show that could realistically do anything and it would have been a bit of a drag to have it draw out that reveal for another few episodes.
-Red must be Jenna Dewan Tatum’s color, because she looked phenomenal at Penelope’s library event.
-I don’t know why Freya felt the need to pull Killian away to tell him that she had a bad feeling. I know, because Drama, but that was a moment that felt a bit too reliant on what the plot needed to happen. Good for them for progressing the love triangle, though, with Freya doing the spell (and gaining confidence in her witchcraft) and Dash standing up for himself. The Groundhog’s Day-ish touch of the recurring dream elements was a nice touch.
-Do you think that Mike knows about the other Ingrid Beauchamps in the world? He had information on Fair Haven and it won’t take much digging to place 1906-Ingrid there with Archibald, considering how much there is out there about him. Although he’s there under the pretense of writing a book, it’s obvious his actual reason for being in town is something else – my wildest guess is that he’s a witch hunter. Or that he’s a descendent of Archibald or one of Archibald’s followers and has come back to fill in parts of his past that he doesn’t know as much about.
-I’m torn with who I think is the trickster, because I could see the approach for making it either Killian or Dash. What would be most interesting is if they have Freya make a decision and it’s the wrong one, e.g. she and Dash don’t get back together following this speed bump and she chooses Killian, only to find out that he’s her destroyer. The show underlined that she knows she has to trust her instincts, but it would be more dramatically interesting if that doesn’t suddenly become her superpower, if she stumbled when it mattered most.
-So, we’re going to be dealing with portals and snake keys and stuff now. Awesome.
-Next week on Witches of East End: Wendy and Joanna fight over a secret, the shifter targets Freya, and Ingrid suspects that Mike has ulterior motives.