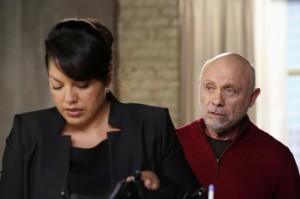 This week on TVHackr, we talked about the futures of The Originals and The Tomorrow People, what’s been going on with Grey’s Anatomy, and a changing of the guard at The Daily Show, while the internet touched on subtitling, Italian TV, and a Netflix redesign.

FOX Gives New Animated Comedy Bordertown 13-Episode Order
FOX will have a new animated comedy on its schedule next season in the form of Bordertown, which tells the story of two neighbors – a border patrol agent and a Mexican immigrant.

Reign 1.05 Preview: Danger from the Woods is Brought to the Castle
On the most recent episode of Reign, a visit from Francis’ ex following an attack on her carriage brings the dangers from the woods to the castle.

Grey’s Anatomy 10.08 Review: Two Against One
While Meredith reaches the next milestone in her research, Callie conducts an interview with Owen’s new girlfriend and April tells her fiancée that she wants to wait to have sex.

Bob’s Burgers Recap: Brotherly Love
While Bob takes a part-time gig as a cook for a fraternity house at a local university, Linda tags along with Gretchen as she attempts to sell sex toys to housewives.

Witches of East End 1.06 “Potentia Noctis” Recap
While Ingrid flashes back to a past life that links her to Fair Haven, Freya makes a shocking discovery related to what Dash pulled out of Maura Thatcher’s throat.

Witches of East End 1.07 Preview: The Shifter Summons a Familiar Face
On the next episode of Witches of East End, Ingrid discovers something startling about her past, while a novelist comes to East End and Joanna reads Freya’s tarot cards.

Starz Makes Changes to Encore Channels
Starz has made over its Encore channel package, replacing Encore Drama with Encore Black and Encore Love with Encore Classic.

Looking Teaser: Get a First Look at HBO’s Upcoming Gay Dramedy
HBO released the first teaser for upcoming dramedy Looking, which stars Jonathan Groff as a man looking for love in San Francisco, this week.

How I Met Your Mother 9.09 Review – Platonish
In a flashback episode, the gang ponders the future of Ted, Barney, and Robin, while Barney accepts challenges from Lily and Robin.

The Originals 1.07 Preview: The Hunt for Hayley is On
On this week’s episode of The Originals, Hayley’s disappearance prompts Klaus and Elijah to search the bayou, while Davina makes a connection with Josh and Rebekah receives an offer from Marcel.

Ravenswood 1.04 Sneak Peeks: Luke Searches for a Distraction
While Luke searches for a distraction from the recent séance in Mr. Collins’ house, Olivia finds a connection between her family and Miranda’s family and Caleb struggles to share what’s been happening with Hanna.

Cougar Town: Matthew Perry to Guest Star in Season 5
Friends alum Matthew Perry is set to guest star on an upcoming episode of Cougar Town, though no details have been released as to his role.

Maya Rudolph to Host Post-Olympics Variety Show
Maya Rudolph has landed a post-Olympics variety special on NBC that could turn into a full series if it’s successful enough.

The Tomorrow People Spoilers: Stephen Tries to Handle a Breakout on His Own
Coming up on The Tomorrow People, Stephen tries to have fun with his powers, John feels tension between himself and Cara, and a plan is hatched to get inside Jedikiah’s head.

The Originals Spoilers: Elijah Struggles with the Fallout with Klaus
Coming up on The Originals, Elijah deals with guilt from the fallout with Klaus, Hayley learns more about her past, and the human faction of New Orleans takes matters into their own hands.

Hell on Wheels Renewed for Season 4 by AMC
After surviving a move to Saturday nights, Hell on Wheels has been awarded with a fourth season renewal and three additional episodes, bringing its order for next season to 13 from the 10 it had for season three.

John Oliver Lands Comedy Series at HBO
Daily Show correspondent John Oliver, who filled in for Jon Stewart this summer, has landed a satirical talk series on HBO, set to air Sundays in 2014.

Grey’s Anatomy 10.09 Review: Sorry Seems to be the Hardest..
While Callie faces her malpractice suit in court, her father attempts to bring her back together with Arizona through a story about his own relationship with her mother.

Reign 1.06 Preview: Has Mary Been Targeted by the Pagans?
On the next episode of Reign, it looks as if Mary has been targeted for a blood sacrifice, while Francis turns to Olivia when he sees how close Mary and Bash have become.

Looking Trailer: You Have to Find Someone Who Understands
HBO has released the first trailer for upcoming gay dramedy Looking, which stars Jonathan Groff, Murray Bartlett, and Frankie Alvarez.

Pop Culture Happy Hour: Twitter And Subtitled Television (NPR)
NPR takes a look at Sundance’s The Returned, including issues of television subtitling and how far one is willing to go from their native tongue in order to find good TV.

New Italian TV show is ‘American Idol’ for authors (Christian Science Monitor)
Masterpiece, a new Italian reality series, will pit aspiring authors against one another to win a book deal.