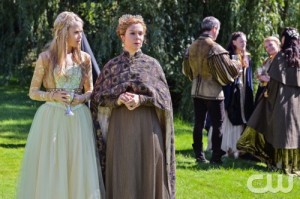 Bash unknowingly brought the dangers of the woods to the castle by interrupting the fresh blood sacrifice, thereby putting everyone in danger from the desperate pagans. To keep the creature in the woods satisfied, they have to continually provide blood and now that Bash has stopped two separate sacrifices, the blood will now be on his hands. Either he has to choose someone to be sacrificed or they’ll do the choosing, but the fact remains that the next death by pagan hands will be his fault. While he doesn’t want to be the one to sentence someone to death, regardless of whether he knows them or not, on the next episode of Reign, Bash’s hand will be forced and a decision will be made.

But is Mary the intended target of the pagans? When she notices their symbol etched on her hand, all efforts are made to catch the guilty party, including locking the castle down. If this is a legitimate threat against the future Queen of France, catching the perpetrator could give the royals a better understanding of what’s happening in the woods and why they’re being targeted; if it’s a prank, they need to know who it is in order to punish them and send a message that the royals are not to be trifled with. Should Mary be in danger from the pagans, though, Bash’s decision might become a little easier, because while he doesn’t want to hurt anyone, especially over something that he did, he would protect Mary over everyone else in the kingdom. Including himself.

Elsewhere on Reign, Francis turns to Olivia once he notices the growing bond between Mary and Bash, while Kenna’s confession regarding her affair with Henry draws a mixed response from her friends.

Is the threat against Mary legitimate or do you think this is just an attempt to scare her? Which of Kenna’s friends will be the most opposed to her affair with Henry? Should Mary attempt to get closer to Francis or is that a lost cause while Olivia is still around?