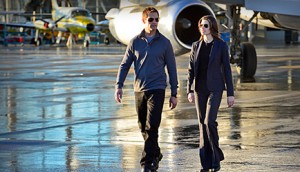 CBS has announced that action thriller Intelligence will be premiering Tuesday, January 7th at 9:00 following a new episode of NCIS. It will then move to its regular timeslot – Mondays at 10:00 – on January 13th following the two-hour finale of Hostages on January 6th at 9:00. The show was previously scheduled to premiere Monday, February 24th, but since Hostages hit a series low for last night’s episode, the network can’t necessarily afford to wait the extra six weeks until the premiere of Intelligence. This way, Hostages gets off the air faster, thereby doing less damage to CBS, and Intelligence gets to utilize a strong NCIS lead-in as well as debut ahead of the Olympics.

Intelligence stars Josh Holloway (Lost) as Gabriel, a high-tech intelligence operative enhanced with a super-computer microchip in his brain. The first human to be connected to the worldwide information grid, he can hack any data center and access key information to help the United States against its enemies, but if Gabriel falls into the wrong hands, he could potentially bring about destruction the country isn’t prepared to deal with.

Hostages currently airs Mondays at 10:00 on CBS. You can check out a trailer for Intelligence below.

Will you be watching Intelligence? Do you think that pushing up the premiere date is a good idea? Is this the show to bring Josh Holloway back to television for an extended run?