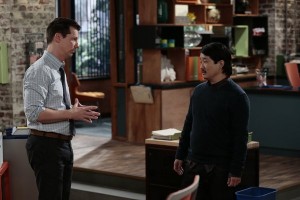 According to Deadline, NBC has ordered five additional episodes of freshman comedy Sean Saves the World, bringing its first season episode total to eighteen. The decision, which comes after the network gave the struggling comedy a four script order, follows a 28% ratings bump that saw Sean match its series high. Granted, it was due to a special episode of The Voice airing at 8:00, but considering the shape that the NBC Thursday lineup is in right now, the network seems to be looking for anything to grasp onto as far as momentum/success for its comedies.

The shortened order tells me two things: the show faces an uphill battle regarding a second season and NBC will be shifting its schedule come March, either by airing the two comedies it planned to use after The Voice (Growing Up Fisher and About a Boy) on Thursdays or using new multi-cam Undateable. Freshman shows that find themselves in the weird gray area between a set 13-episode order and a 22-episode order tend to have only gotten the extension due to scheduling needs and therefore, unless there’s a sudden burst of momentum from people sampling Sean last Thursday, star Sean Hayes’ star power might not be enough to get the show a spot on next season’s schedule.

While it’s difficult to get any eyes to NBC for programming that’s not The Voice or Sunday Night Football, the network didn’t do the show any favors by how they scheduled it, as Sean Saves the World is the lone multi-cam in a lineup of single-cam comedies and is forced to face off with fellow new comedy The Crazy Ones and Grey’s Anatomy. It might have been more beneficial to slot this show behind The Michael J. Fox Show rather than making it to fend for itself with a DOA lead-in (Welcome to the Family), especially when Fox has built on Sean for all but one week this season.

Sean Saves the World airs Thursdays at 9:00 on NBC.

Have you been watching Sean Saves the World? Do you think that the show will make it to a second season? What will it take for NBC Thursdays to regain the prominence that they once had?