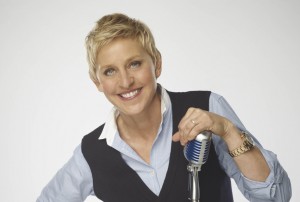 Everyone’s favorite talk show host is dancing into primetime, as she is working on a new project with NBC.  Ellen DeGeneres is executive-producing a new comedy currently in development for the peacock net that will feature a lesbian lead character, Deadline is reporting.

The untitled project centers on a lesbian who becomes pregnant by her straight male best friend, just before he meets and marries the love of his life.  Liz Feldman (2 Broke Girls) will be writing as well as executive producing for the multi-camera comedy.  Feldman previously worked on DeGeneres’ talk show and wrote for the host’s first run with the Oscars.

(DeGeneres will be hosting the Oscars for a second time on March 2nd.)

This is the latest gay-themed production at NBC, which has a history of LGBT-themed programming including this season’s Sean Saves the World, though many were wiped out with last season’s cancellations (Smash, Go On, The New Normal).

Would you watch?  Hit the comments!