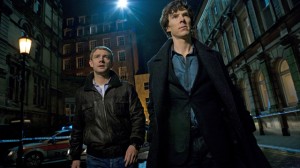 This week on TVHackr, we talked about how NBC and FOX will approach midseason, the possibility of a Philip Marlowe series on ABC, and when season three of Sherlock will premiere, while the internet touched on TV weddings, how to make a ridiculous show work, and learning to love broadcast TV.

BBC America Orders Intruders Adaptation to Series from X-Files Writer
Coming to BBC America is thriller Intruders, an adaptation of the novel of the same name by Michael Marshall that tells the story of a society seeking refuge from mortality.

The White Queen Series Finale Recap: God Save the King
On the series finale of The White Queen, Henry Tudor makes one final play for the throne, while Anne and Richard continue growing apart and Elizabeth settles into a life of routine.

Witches of East End 1.03 “Today I Am a Witch” Recap
While Wendy tries teaching the girls how to use their powers, Freya finds herself having strange dreams and Joanna has another run-in with the shifter.

Face Off Renewed for Season 6 by Syfy
Syfy has renewed acclaimed reality-competition series Face Off for a sixth season, which is set to premiere this January.

Witches of East End 1.04 Preview: Joanna Fights Back Against the Shifter
On the next episode of Witches of East End, Freya is tasked with helping Dash and Killian mend fences, while Ingrid rethinks her relationship with Adam and Wendy seduces an entomologist for spell ingredients.

Getting On Trailer: Angels of Mercy
HBO has released the first trailer for medical comedy Getting On, which centers on an extended-care facility in Long Beach and the nurses who work there.

Dracula Spoilers and Promos: The Blood is the Life
Coming up on Dracula, Dracula moves to London under the guise of introducing modern science to the city, but he soon discovers that the wife he thought was dead might not be.

Castle Review: “Time Will Tell”
Castle and Beckett deal with a suspect who claims to be a time traveler, but while they eventually find the true killer, the initial suspect’s claims aren’t as far-fetched as they may seem.

How I Met Your Mother 9.06 Review – Knight Vision
While Ted finds himself with three prospects for a wedding date, Barney and Robin have a confrontation with their minister and Marshall learns more about Daphne.

Body Of Proof: Could ABC Revive The Series?
Rumors have surfaced that ABC is pondering a revival of Body of Proof, which it canceled this past May. Should the network go through with it?

Sherlock Sets Season 3 Premiere
The third season of Sherlock will premiere Sunday, January 19th at 10:00 on PBS, the first time the U.S. air date has been announced before the UK date.

Arrow Adds New Villain, Sean Maher to Guest Star
Firefly alum Sean Maher has signed on to play Mark Scheffer later this season on Arrow, which will reunite him with Summer Glau, who joined the cast this season.

Betrayal 1.05 Preview: Has Sara’s Affair with Jack Benefitted Them Both?
On the next episode of Betrayal, Sara’s affair with Jack has a positive effect on both of their lives, while Ronnie deals with finding crucial evidence in Lou’s murder investigation.

Chuck Lorre to be honored with ‘Norman Lear Award’
Chuck Lorre has been named the recipient of the Norman Lear Achievement Award by the Producers’ Guild of America.

Ravenswood: “Series Premiere” Review
On the series premiere of Ravenswood, five strangers are brought together by a deadly curse that has been impacting their town for generations. Can they find a way to reverse it?

Tessa Ferrer(Grey’s Anatomy): Leah likes Arizona’s attention
Tessa Ferrer hinted to The Hollywood Reporter that there might be something between Leah and Arizona in the coming episodes of Grey’s Anatomy.

Secrets & Lies Adaptation Ordered to Series by ABC
ABC has ordered an adaptation of upcoming Australian crime drama Secrets & Lies to series. The original is set to bow in 2014.

Cable vs. Broadcast TV: Learning to Love the Low End of the Dial (Variety)
Variety discusses its renewed enjoyment of broadcast television, which has come after adjusted expectations.

Timeshifting: let’s make TV weird again (The Verge)
The Verge argues that television should take advantage of the age of timeshifting and get weird again.

The 12 Best New Characters of the Fall 2013 TV Season (TV.com)
Did your favorite new character of the fall make TV.com’s list of the 12 best?

I Do: The 17 Best Television Weddings (BuddyTV)
BuddyTV counts down the best weddings in television history.