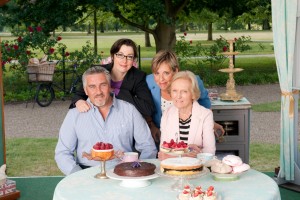 A huge audience tuned in to watch London’s amateur baking competition, The Great British Bake off on BBC Two, even breaking the previous record which was held by Top Gear. The finale episode of the baking competition show recorded the highest audience views for the show as well as for the network channel.

If we look at the numbers, The Great British Bake off was watched by an average audience of 8.4 million people on Tuesday and with this figure gave BBC Two, the highest ratings of all time, after the channel launched a new measurement system and also, with this the show outdid the previous record, which was held by Top Gear. As per the record, the previous benchmark was established by Motor Vehicles Show under the old rating system, in the year 2007, which drew a viewership of around 8 million people. But, The Great British Bake off raised the bar as the show was watched by a total of 32.6% of the total number of British viewers, watching television at that particular time.

This year the number of viewers during the peak of finale episode was somewhere close to 9.1 million, covering a share of 34.2%. On the contrary, the finale episode of the previous season, i.e. Season 3 accounted for the audience of 6.5 million in general and a viewership of 7.2 million people, during the peak time of the episode. The public broadcaster of U.K. announced that the fifth season of the king show will be transferred from the BBC Two Channel to BBC One, which is UK’s highest-watched Television channel.

The Great British Bake off is a show which showcases inexperienced, but passionate bakers whose baking items are judged by a couple of experts. The show is known to have inculcated a growing interest in baking across Britain. The show has seen a continuous rise in popularity over its four seasons. Some of the other hit shows of BBS Two include Line of Duty, The Fall and The Wrong Mans.