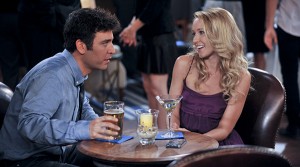 This was not my favorite episode of How I Met Your Mother – I’m not even sure that I liked it as a whole.  But that being said, I did enjoy the couple running gags.

Naturally, being the show’s final season the episodes are going to weave in and out of the character’s journeys to their various end points.  We know what Ted’s is – he has to meet the mother at some point (though she’s been absent since the season premiere).  Lily and Marshall – we have no idea where they’re going to end up; Rome vs. New York, and while we know that it’s Barney and Robin’s wedding weekend, do we really know how that‘s going to end?

That being said, this episode did little to move the story forward in the way of the wedding.  After stealing Lily and Marshall’s story of how they met, Barney and Robin find themselves in trouble with their minister, guest star Edward Herrmann.  The two confess their sin and end up listing all the reasons why they love each other (otherwise known as the reasons why they’re so fittingly imperfect) – while their minister…well, dies.

However, as I mentioned, I found the couple bits of backstory role-switching entertaining to say the least.

As for Ted, “Knight Vision” saw him apparently trying to find a meaningless fling for the weekend, and getting stuck with Cassie (guest star Anna Camp), who to put it lightly, is a wreck.  She turns into a sobbing mess very quickly into their ‘date’ and Ted ends up caught trying to be a nice guy for her.  But, while the storyline itself seems odd (and just a touch out of character for Ted) it has a point.  As he says if everyone else hadn’t seen him with Cassie, efficively ruining his chances with all of the other women, he may not have met the mother.

Apparently, despite being on the same train as Lily the mother hasn’t been in Farhampton for any of the pre-wedding festivities.

“Did you prepare for talking to Lily?” – This was actually my favorite thread in the episode.  Since accepting a judgeship, it seemed very odd that Marshall wouldn’t tell his wife, or even really consider her feelings in his decision.  Yet, while on the road with Daphne, she forces him to admit that he hasn’t at all thought logically about what he’s going to do about the issue, when Lily thinks that they’ll be moving to Rome.  I like the slight tension this puts between Marshall and Lily – someone has to be having conflict during the weekend – and I really like Daphne, even though the scenes do come off slightly disjointed from the rest of the story.

So yes, I guess I did like “Knight Vision.”  It’s simply a necessary evil of the final season set-up that some episodes will seem more important than others.  Stories will get shuffled around – though they’re really not in the timeline of the weekend – and there will be episodes like this that seem more or less “eh,” in comparison.  If you’re one of those people complaining about it, try thinking about it as one long movie  – or zoom out from the episode-by-episode view and consider the wedding weekend as a whole.

Low point: Anna Camp needs to work on the faux-sobbing.