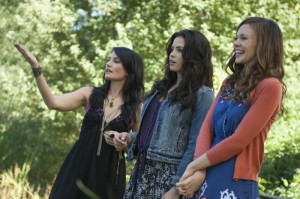 After getting up close and personal with the shifter, Joanna finally decided to do something about its presence in East End and allow Ingrid and Freya intensive lessons on how to hone and control their powers. It’s something that makes her uncomfortable, but it’s something that is in the best interest of the family’s safety, considering that she’s been out of practice lately and Ingrid has the type of power that, when redirected, could make the difference in the battle with the shifter. Rather than try to stuff that genie back in its lamp, it’s time for the Beauchamp daughters to get in touch with who they are and the powers that are at their fingertips; however, they won’t be able to get fully comfortable with their power for some time, so Joanna is going to have to be on the frontlines of the conflict essentially by herself.

On the next episode of Witches of East End, Joanna turns to Harrison for help, as they must prepare for the impending murder trial and figure out a way to protect themselves from the lurking shifter. The Beauchamp women may have put forth a protection spell, but the shifter has shown the ability to break those, meaning that while it’s still holding, they must figure out their next line of defense. While Wendy is going into overdrive with lessons for Freya and a reluctant Ingrid, emotionally damaged by her attempt at reversing the resurrection spell, Joanna needs to tap into what makes her the total package of a witch and tap into the power that she’s purposefully shied away from during this lifetime. If the protection spell stands long enough, Joanna will be able to rediscover her power and find her abilities supplemented by Wendy, Freya, and Ingrid; however, if the shifter breaks the spell before the Beauchamps are ready, each and every one of them will be in danger.

Elsewhere on Witches of East End, Freya is called upon to help bring Dash and Killian together, Ingrid rethinks her relationship with Adam, and Wendy seduces an entomologist for spell ingredients.

Will Joanna be able to fight back against the shifter? Is Freya the one to mend fences between Dash and Killian? What type of spell would Wendy need insects for?