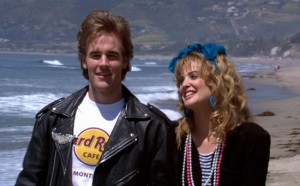 James Van Der Beek is now one more on the list of returning guest stars for How I Met Your Mother‘s final season!

Much like Cobie Smulders’ announcment of William Zabka’s return, James Van Der Beek tweeted the news of his return to the comedy on Friday afternoon.  He also posted a photo of the episode’s script on Instagram (see below).

Van Der Beek previously appeared on How I Met Your Mother as Robin’s loser, lame musician, ex-boyfriend Simon in “Sandcastles in the Sand” and last season’s Robin Daggers episode, “P.S. I Love You.”

Will he be bringing trouble for Robin and Barney, pre-wedding?  Or appearing in flashbacks…or dare I ask, flash forwards?