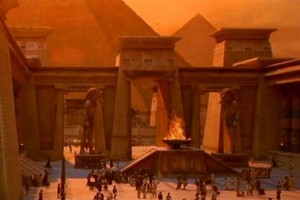 FOX has given a 13-episode series order to action-adventure drama Hieroglyph, whose pilot was written by Pacific Rim screenwriter Travis Beacham and will be directed by Miguel Sapochnik (Fringe, Awake). The series, set in ancient Egypt, will follow a thief who has been tasked with serving the Pharaoh following a stint in prison. Along the way, he’ll have to navigate the complexities that lie within the palace, including sorcerers and criminal underbellies.

“We wanted to do a show about deceit, sex, intrigue in the court and fantastical goings-on – no better place to set that than ancient Egypt,” said Kevin Reilly, Chairman of Entertainment for FOX. “Travis Beacham has an inventive mind, and he has wrapped this all together in this intoxicating new drama.”

Hieroglyph is the second straight-to-series order that FOX has given in recent weeks, as they’ve also picked up 13-episode Gotham, which is set to tell the origin story of Commissioner Gordon. That series takes place about a year before then-Detective Gordon first met Batman. There’s no indication of when either series can be expected to air, though with the success of Under the Dome, it seems likely that at least one original drama will find its way to FOX’s summer 2014 schedule. However, Kevin Reilly made comments to The Hollywood Reporter recently that indicated a growing dissatisfaction with pilot season and a motivation to make the development process more efficient by hanging out a greater number of straight-to-series orders. Therefore, there’s a chance that both Hieroglyph and Gotham could be held for next season and just the tip of the iceberg in terms of series orders for FOX.

Production on Hieroglyph is set to begin in early 2014. Casting information should be revealed in the coming months.

Does Hieroglyph sound like something you would watch? Is this a series that FOX should hold until the 2014-2015 season or should they attempt to air it sometime during next summer? Would you like to see more networks going for straight-to-series orders vs. the pilot development process?