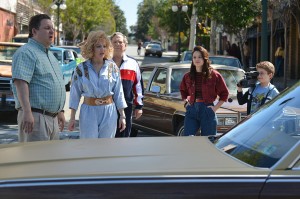 It looks like ABC has some level of confidence in their Tuesday night comedies.

The network has ordered three additional scripts for both The Goldbergs and Trophy Wife, TVLine is reporting.

The sitcoms have been performing comfortably, though not stellar, in the ratings since their premieres, and Trophy Wife could probably benefit from a move to a timeslot out of Modern Family (rather than the slightly-less-than-fun Super Fun Night), but this is nonetheless hopeful news for the two.  Time will tell if the comedies will last a full season.

The Goldbergs, is based on creator Adam Goldberg’s real family life.  Set in the 80s, it is exactly what it sounds like – a comedy about The Goldberg family.  In fact, each episode ends with clips of Goldberg’s home movies.

Trophy Wife, which has suffered some flack for its title, follows Kate, third wife of Pete Harrison, as she navigates her new and extensive (and slightly wacky) family.  This includes three step-children and Pete’s two ex-wifes, plus her best friend.

Excited about more of these two comedies?  I know I am.  Hit the comments below!