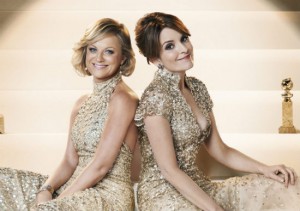 Yet again, the super hit pair, Tina Fey and Amy Poehler will be hosting the Golden Globes for subsequent two years and that makes it three years in a row! The Globes, earlier this year received an amazing response, in terms of viewership of the Awards show, of what was estimated to the highest in six years, accounting for a total of 19.7 million viewers.

Tina and Amy were co-anchors on the ‘Weekend Update’ special on Saturday Night Live’s from 2004 to 2006 and co-hosted this year’s Golden Globes award show. It was being assumed lately that the Hollywood Foreign Press Association and Dick Clark Productions, the producer of award show, were having talks with the duo. According to Paul Telegdy, the President of late night programming on NBC, Tina Fey and Amy Poehler are the most gifted comic performers/writers in the comedy show business and that the duo played a major role in Globes’ enormous success this year. He further said that the channel is enthralled by learning that both of them will be hosting Golden Globes for another two consecutive years.

When asked the pair about hosting the Oscars, Fey put all speculations to rest by saying that it is a huge task to sing and dance and do the pre-taped segments, etc. Theo Kingma, the HFPA President also said that the return of the ladies on the Globes will ensure another fun-filled and the most entertaining award ceremonies of the next year.

Fey and Poehler also appeared in the Emmy’s last month, for a brief opener with the Emmy host, Neil Patrick Harris. Allen Shapiro, CEO, Dick Clark Productions added that the pair has unbelievable chemistry and when they get together on the stage, putting up a charismatic show.

Apparently, everyone is thrilled and can’t wait to see the duo on stage again. What’s your take on the pair?