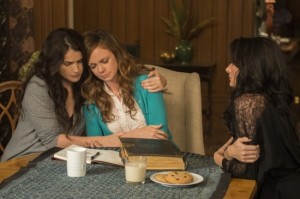 Joanna Beauchamp has been hesitant about using (and talking about) magic with her girls, thinking that this lifetime would allow them the opportunity to be as normal as possible. She’s not necessarily wrong in wanting that for Ingrid and Freya, seeing as how their powers were the cause of their dozen deaths, but she can’t let the ideal supersede the reality, which is that they need to harness the gifts they’ve been given from birth if they have any hope in defeating the shifter. While Joanna and Wendy may be powerful on their own, the shifter is strong enough and manipulative enough to where they need the reinforcements that Ingrid and Freya provide, especially when the former is said to be the most powerful Beauchamp of them all.

On the next episode of Witches of East End, Joanna has begun digging into her past to figure out who is responsible for framing her for Bill’s murder. Being that she’s been alive for quite some time, it might take some time for her to narrow down the search, whose results will inform how the family tackles this threat to their very survival. What could help her pinpoint the identity of the shifter is a healthy dose of black magic, something that Joanna rejects entirely, both for the consequences it could bring the family and the addictiveness that has swallowed many a witch whole. She might want to dispatch the shifter and dismiss the murder case against her, but she also wants to be alive (and healthy) to teach her girls about their gifts and if she indulges in black magic, that’s not guaranteed.

Elsewhere on Witches of East End, Freya gets a new coworker at the bar, while Wendy tries to teach the girls about their powers and Ingrid struggles with the consequences of the resurrection spell.

Should Joanna do whatever’s necessary in order to identify the shifter? How will Ingrid cope with the figurative sword hanging over her head and the heads of those she loves? Will Wendy’s guidance help Ingrid and Freya embrace and learn to control their abilities?