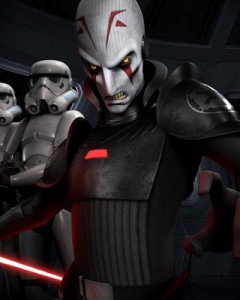 Disney and Lucasfilm revealed the villain of their animated TV series, Star Wars Rebels yesterday in the New York Comic-Con. The new character is called the ‘Inquisitor’ who is dressed in all black and is termed as quite threatening. The purpose of this character in the series is that he has been appointed by Darth Vader in order to search for the Jedi, left behind. In the image shared by Disney and Lucasfilm, we can also see that the Inquisitor is supported by some Stormtroopers, as he is preparing for the battle.

The storyline of the animated series is set amidst the Star Wars – Episode III and Star Wars – Episode IV, Revenge of the Sith and A new Hope respectively, which is around two decades. It takes place during the time when the Empire is acquiring a good grip on the galaxy and searching for the remaining Jedi Knights and at the same time there is fledging revolution in the making, against the empire.

Just a few days ago we saw Disney XD showing the 16-second teaser of Star Wars Rebels and now in the Comic-Con, Ralph McQuarrie launched the concept art and the official logo of the animated series. We know that Freddy Prinze Jr. and David Oyelowo have already on-board to voice for the lead characters. So gear up all you Star Wars fanatics as Star Wars Rebels will be featured on Disney Channel in 2014, for a one-hour special episode and thereafter, the series will premiere on Disney XD.

Watch below the video which was showcased at the Comic Con on Saturday, where the Executive Producer of the series, Dave Filoni will take you behind-the-scenes of the Star Wars Rebels and discusses other details of the show.


So, are you looking forward to the much-anticipated animated series of 2014? Check out StarWars.com for more information.