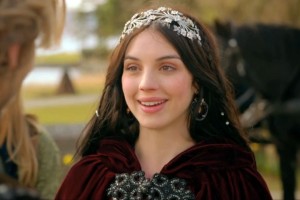 Deadline is reporting that The CW has ordered three additional scripts for each of its new fall offerings: Vampire Diaries spin-off The Originals, British adaptation The Tomorrow People, and costume drama Reign. While a script order is not the same thing as a back nine episode order and doesn’t guarantee that episodes will be made for every script, it’s a vote of confidence from the network that bodes well for how they’ll treat each new fall drama this season.

The Originals has already aired two episodes – one behind The Vampire Diaries and one in its regular Tuesday time slot leading into Supernatural, with the former showing strong retention (and stronger L+3 numbers) out of its mothership. The most recent episode dipped very slightly against NCIS, The Voice, and Marvel’s Agents of SHIELD, a good sign for the show’s viability when leading off a night and airing away from Vampire Diaries. Meanwhile, the series premiere of The Tomorrow People matched the season premiere of Arrow in the 18-49 demographic, suggesting that the two are strongly compatible, and Reign has yet to premiere due to being pushed back for the extra airing of The Originals.

Reign was always the biggest question mark going into the fall for The CW, as historical dramas are very much outside their wheelhouse and the show will have to go against two shows that do extremely well with female viewers in Grey’s Anatomy and Glee. However, it will get the best possible lead-in from the network and the script order suggests that The CW might be patient considering the circumstances, especially with its Monday lineup being very weak.

The Originals airs Tuesdays at 8:00 on The CW, while The Tomorrow People follows Arrow at 9:00 on Wednesdays and Reign will premiere Thursday, October 17th at 9:00.

Which of the CW’s new fall dramas will you be watching this season? Do you think that the network should lean even more into genre programming with the success of The Originals and The Tomorrow People? Can Reign maintain enough of the audience from The Vampire Diaries to get a renewal?