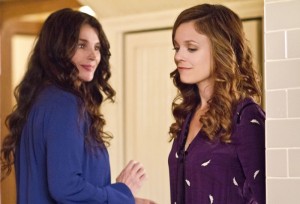 Before she even had the chance to process the knowledge of her own magical abilities, Ingrid Beauchamp saw her mother taken away on murder charges and was tasked with not only resurrecting her aunt Wendy, back in her feline form, but saving her sister Freya from a jilted former lover. Although she first got an inkling about the magic within her when Barbie discovered she was pregnant following the fertility spell, it’s something entirely different for the self-described rational skeptic to have her suspicions confirmed and her life turned upside down by the knowledge of her supernatural gifts. On the next episode of Witches of East End, Ingrid must now tap into said gifts if she wants to keep her family in tact, but will she be able to learn how to control them before it’s too late?

Since Joanna told her about the breakfront, she’ll have access to enough dangerous family heirlooms to help bring back Wendy from her latest death, which could be enough to help Freya escape from the picture and return home safely. Should she be forced to save her sister by herself, Ingrid might not have the understanding of her power necessary to do so, especially since she would have to go up against Doug, the man who took her captive; however, with Wendy’s knowledge of magic and strength as a witch, the chances of Freya coming home increase greatly. But even if/when she returns home, the trio will have to be on guard against the shapeshifter who threatens to bring their family down while working to free Joanna from the wrongful accusation of Maura Thatcher, so it looks like a witch’s work is never done. Not by a long shot.

Elsewhere on Witches of East End, Joanna is questioned by the police following her arrest for murder, while Dash and Killian have a tense reunion due to the latter’s feelings for Freya.

What did you think about the first episode of Witches of East End? Once Ingrid manages to save her aunt and sister, how will she react to her newfound abilities? Who would try and have Joanna framed for the murder of Bill Thatcher by shifting into her form?