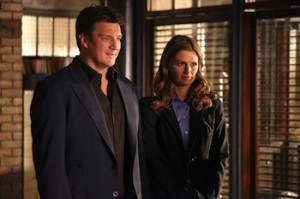 Excuse me while I pick my jaw up from the floor. I’m usually pretty good, but I honestly did not see that ending coming. Before I jump to the end, let’s start at the beginning. Castle’s third episode of the season, “Need To Know” had a great mixture of fun, suspense and many adorable Caskett moments. As a child of the 80’s, I grew up watching Saved by the Bell, so Monday’s episode really brought back some great memories. (I know I know, looking back SBTB was really cheesy, but what did I know? I was 5 when the show began.)

Much to my annoyance, Pi was still around. Even though I can’t stand him, that guy could not ruin the cutest Caskett moment ever. Castle and Beckett video chatting in bed was beyond adorable. I could not wipe the smile off my face as Beckett kissed her phone and Castle grabbed the kiss and wiped it all over his face. For me, that ranks right up there with the best handshake ever scene from last season.

Our victim this week was ex sitcom star, Charlie Reynolds. Poor guy was found dead on a hook. Of course Castle insinuated himself into the investigation, but the shock came when Agents McCord and Beckett took over the investigation. I still find it strange calling Beckett an agent. Although, I don’t have to anymore, but more on that later.

We learned from Charlie’s co-star Ramon Russo, guest star Antonio Sabato Jr., that him and Charlie were filming a reunion movie for “2 Cool For School.” Something fanboy Ryan was very excited about. Apparently the Russians were financing the movie. According to Ryan “2 Cool For School” was huge in Russia. “2 Cool For School” is to Russia, what David Hasselhoff is to Germany. For the Russians, the movie was all a front to smuggle illegal weapons into the U.S. It turns out the CIA recruited Charlie to spy on the Russians. According to the CIA agent, Charlie was an excellent spy but he was looking for a way out. He wanted to escape with his love Svetlana, Anton’s niece. Charlie knew Svetlana wanted out of that life and was going to help her escape. Just when you thought the Russian’s had Charlie killed, the killer turns out to be Ramon. Ramon wanted his career back and Charlie wanted to walk away from everything, ruining Ramon’s chances for getting his old life back. The typical crime of passion. Isn’t that always the case?

Throughout the episode, the audience could really sense Beckett’s frustration about her new position. She was conflicted, and I didn’t blame her one bit. I was a bit shocked when Beckett gave Castle the usb key with the satellite footage of Charlie going into the warehouse. I didn’t think Beckett would do that, but she did something riskier later on. I cheered Captain Gates on when she told McCord and Beckett that Charlie’s killer should not go unpunished. Something Beckett was in agreement with. McCord didn’t seem to care though. Beckett is all about getting justice for the victim’s, something McCord wasn’t really interested in.

What the CIA did next really pushed Beckett over the edge. They wanted Svetlana to spy on her own family and take Charlie’s place. The CIA agent threatened to expose her if she didn’t do it. Beckett heard all of it and wasn’t impressed. It was crazy of Beckett to tip off the press about Svetlana being under investigation for her alleged ties to Russian organized crime. Essentially getting her family to cut ties with her so she’ll be to no use to the CIA. I understood why Beckett did it. You saw the frustration building and that was the last straw.

This show really needs to stop with these fakes outs though. There’s no way Castle was going to break up with Kate, but when Castle said this long distance thing isn’t working, it made me nervous and it make Beckett nervous too. Of course we had nothing to worry about. Castle found an apartment in D.C. for him and Beckett. Castle said he could write from anywhere. Yes! thank you writers! The next scene threw a huge wrench into that plan.

The Feds found out that Kate tipped off the press and McCord told Kate she was fired! Is it bad that I’m quite happy about this? Don’t get me wrong, I loved that Beckett took the job in D.C. She deserved it but the back and forth was killing me. I just never thought Beckett would get fired. Here she is doing something she believed in, honouring the victim, and she gets punished for it. She started to realize that to do that job you had to “overlook” and let other things/crimes go, and that’s never what she’s been about. She’s always been about searching for the truth no matter what and trying to get justice for the victim and their loved ones. I think this a good thing for Beckett. She was really compromising what she believed in for that job. Now she can get back to what she does best.

There were so many hilarious lines from this episode, let’s relive some of the moments.

“Maybe you are Judas’ Judas.” – Esposito

“Castle, you’re not going to Castle me on this one.” – Beckett

“I take it you’re finishing up paperwork on the case you are no longer investigating?” – Captain Gates

I had to laugh out loud when we found out the Nikki Heat movie went straight to dvd. I always wondered whatever happened to the movie. This episode was a total hoot, and the Castle and Beckett scenes were amazing. Being engaged really does suit these two. It’ll be really interesting to see what happens next for Beckett since she did just get fired. How quickly will she go back to the NYPD? What will happen to Sully? And my big question, where is Lanie?

Now it’s your turn readers. What did you guys think of the episode? How shocked were you that Beckett was fired? I’d love to read your comments. Sound off below.

"Is it bad that I’m quite happy about this? " -No, trust me. An entire theater of people at Paley agreed with you. I've never heard an audience cheer so loudly for a favorite character's firing. ;) PS-Lovely review as always!