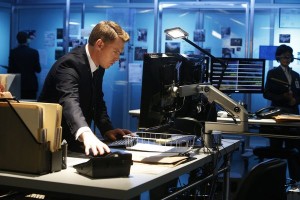 NBC has officially picked freshman crime drama The Blacklist up for a full 22-episode first season, making it the first new fall series to earn a back nine. The series, which stars James Spader as a fugitive who turns himself into the FBI and begins helping them catch a “blacklist” of criminals, is the #1 new drama on the Big 4 networks so far this season in total viewers and currently averages a 3.6 in the 18-49 demographic.

“The many layers of Red Reddington and his mysterious reasons for getting into bed with the FBI seem to be fascinating to fans of this show,” said President of NBC Entertainment Salke. “With great talent like James Spader and Megan Boone on board, as well our stellar executive producers and the whole cast and crew, we believe this outstanding series will continue to make NBC a big destination on Monday nights.”

As with Revolution last season, The Blacklist has helped keep NBC Mondays very strong, though its broader appeal and procedural elements should prevent it from collapsing in the way Revolution did later in the season. Even if it does come to Earth a little more and hit the 2’s in the 18-49 demographic, NBC has much bigger problems and more difficult nights to attend to, meaning that the bottom would have to completely drop out of the series for it to not make it to another season. While Castle is a steady performer, the bigger question mark comes from CBS, where Hostages hasn’t done well; depending on what they do and whether a new series could launch on what has become a weak night for them, The Blacklist could solidify itself as a time slot winner for the rest of the season.

Have you been watching The Blacklist this season? Which new series do you think will get the next back nine order? Do you think that The Blacklist can hold in the ratings better than Revolution did last season?