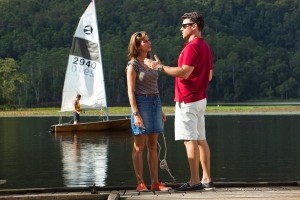 Camp, the low-cost, Rachel Griffiths-fronted summer dramedy will not be returning to NBC next year.

Actor Nikolai Nikolaeff broke the news Tuesday via Twitter.  “So…It was a great summer and I loved every minute of it.  Sorry to all the @NBCCamp fans out there but no go on #CampSeason2,” he posted.

The show came from Deception‘s Liz Heldens and Peter Elkoff, and depicted a summer camp for families.  NBC had picked up Camp straight to series, ordering 13 episoes in January.  Camp performed only slightly better than NBC’s other scripted summer spot, Siberia, averaging just a 1.2 rating among adults 18-49.

Other summer scripted dramas, including ABC’s British import Mistresses and CBS’ big-budged Under the Dome, have already been picked up for second seasons.