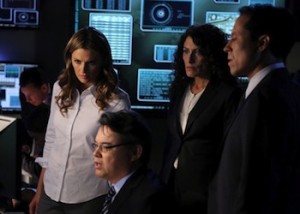 “Sometimes the hardest things in life are the things most worth doing.” No truer words have ever been spoken. The intense conclusion to the Castle season 6 premiere was last night and “Dreamworld” pretty much had me on the edge of my seat the entire time. The second episode of the season had such a serious and intense tone. I had to remind myself that we’re only September. How am I going to survive November sweeps? The stakes were incredibly high this episode. Castle’s life was on the line and Beckett was determined to find the antidote and save Castle’s life. Yes I know, they would never kill off Castle but it was still incredibly intense.

So, let me break this down. This man Rasheed was following our victim Bronson. Except that wasn’t the case. It turned out Bronson was the one following Rasheed. The night of the missile strike, Bronson was holding the body of a young woman and Rasheed saw this. Bronson threatened him and left with the body. Here comes the plot twist I didn’t see coming. Valkyrie turned out to be a code name for an American intelligence operative. Secretary of Defense Reed killed this agent and made Bronson cover it up. This agent was the body that Bronson was holding. Reed lied about everything. Brad Parker, the reporter we met was also connected. He was engaged to Farrah Usman, the operative. Confused yet? My mind was going a mile a minute just trying to keep up with the case. Brad Parker was hell bent on revenge and his next victim was Secretary Reed. Castle and Beckett doing what they do best figured out Parker wasn’t going to go after Reed, but was going to go after Reed’s wife. That was actually a pretty nice twist to the story.

When Castle fell unconscious to the ground, my heart just sank. I could see in Beckett’s eyes she wanted to stay with Castle, but there really wasn’t much she could do. The only thing she could do was go after Parker and get the antidote. I just loved the look on Beckett’s face. She turned into badass Beckett. Have I mentioned how much I love badass Beckett? Despite Parker getting the better of Beckett, he didn’t have what she had. A partner to back him up. I was so happy when McCord came to back up Beckett. I really enjoy their partnership, but I really miss the dynamic of Beckett, Castle, Ryan, and Espo.  We won’t have to wait very long for that though. I’m sure everyone knows Lisa Edelstein was only guest starring for 3 episodes, which means next episode will be her last. (For now, because who knows.) I really enjoyed Beckett in D.C., but I think it’s time to bring her back to NYC.

Just like Beckett, I really wanted to see Secretary Reed fry for what he did. He got off scott free of course. “You want everything to be black or white I get it. But in this town it rarely is. And to do this job you have to make peace with that.” Yes McCord, Beckett does. By the look on Beckett’s face, is she starting to regret taking this position? She wanted justice and that didn’t happen. Beckett is all about justice. She really believed she was going to take this position and get the bad guys. In this case, that didn’t happen. I really don’t think Beckett can make peace with that. Her facial expression at the end spoke volumes. That’s all Stana Katic. She doesn’t even have to say anything. You can tell everything she’s feeling by her facial expressions.

Things that drove me a little nutty: Lack of Ryan and Espo tonight, and no Gates or Lanie. I’m really missing the rest of my favourite cast on television. I did love that Martha went to Ryan and Esposito for help when she was understandably worried about Castle. There wasn’t much they could do, except call Beckett. I didn’t blame Beckett for lying to them, but it did hurt.

Thank goodness we got some sweet, less intense moments in this episode because I don’t think I could have handled a full episode of suspense. Kate’s “I’m not letting you out of our engagement that easily” made both Castle and I smile. I need more of these moments. I also need more Caskett moments. When Castle woke up in that hospital bed and saw Beckett, Martha, Alexis, and Pi (don’t get me started on Pi), I had so many feels. Especially since the Caskett theme played in the background.

Despite Castle thinking he was going to die earlier in the episode, I really loved the scene between him, Martha, and Alexis. Castle tried to cover up what was going on but Alexis and Martha knew something was up. Castle was serious and wasn’t his smart aleck self. Martha was way to smart for that.

Another scene I really loved but made me even more emotional, was when Castle asked McCord how Beckett was doing in Washington. This scene truly showed the depth of Castle’s love for Beckett. I took this scene to mean, despite the possibility he was going to die, he was concerned about Beckett and her work and how she would be. Castle’s character development over the years is truly amazing. That’s what really makes me fall in love with these characters. They’ve grown so much, as they should. I’ve already fallen in love with this season, and we’re only 2 episodes in.

Next week’s episode, “Need to Know” brings Beckett and McCord to NYC to take over the NYPD’s case. Let the hijinks begin!

Now it’s your turn readers. What did you guys think of the episode? How awesome was badass Beckett going after Parker? Are you ready for a lot more of Ryan and Espo? Because I know I am! Hopefully we get to see Lanie and Gates next episode also. I’d love to read your comments. Sound off below.

Is it next Monday yet?

How have I not commented on these wonderful reviews yet? Shame on me! I love reading them every week. :) Thanks for sharing your thoughts on one of my favorite shows. And yes, Badass Beckett is always fan-freakin-tactically awesome! Feel free to put that on a T-shirt! ;)

Aw! Thanks Kris! You're the best!