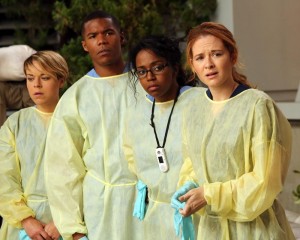 This week on TVHackr, we talked about the 10th season of Grey’s Anatomy, winners at this year’s Emmy main ceremony, and what’s to come on How I Met Your Mother, while the internet touched on comedy becoming more dramatic, the influx of film writers in the television industry, and unsexy sex scenes.

Sleepy Hollow: Fringe Alum John Noble to Recur
Noble has signed on for a recurring role on the genre series as Henry Parrish, a man with supernatural powers who could help Icabod and Abbie.

ABC to Premiere Super Fun Night with Second Episode
Rather than airing the much-criticized Super Fun Night pilot, ABC will use the second episode of the series as a de facto series premiere.

The White Queen Episode 6 Recap: You Flatter Her to Even Dwell on Her Name
While Edward heads off into battle once more, Elizabeth faces heartbreak on two levels and Anne makes a major move to secure her future.

Devious Maids Season Finale Recap: Who Killed Flora Hernandez?
On the season finale of Devious Maids, Flora’s killer is revealed, but what problems will the girls have to solve next season?

Penny Dreadful Teaser: I Believe in Curses
Showtime has released the first teaser for upcoming psychosexual thriller Penny Dreadful, which begins production this fall for a 2014 premiere.

Revenge Season Premiere Spoilers and Extended Promo: It’s Make or Break for Emily Thorne
Check out descriptions for the first three episodes of Revenge‘s third season, as well as an extended promo showing what’s to come for Emily Thorne.

Betrayal Series Premiere Spoilers: Sara and Jack Struggle with Their Feelings
Coming up on Betrayal, Sara and Jack are forced to deal with their feelings for one another and the murder case that threatens to split them for good.

Lucky 7 Series Premiere Spoilers: What Would You Do If You Won the Lottery?
On the first episodes of Lucky 7, the Gold Star employees try to get used to the spotlight their win puts them under, while the police continue to investigate the robbery.

Castle Season 6 Premiere Review: “Valkyrie”
The season 6 premiere of Castle consisted of flash forwards, Lisa Cuddy, an answer to the proposal, chemical toxins, and new boyfriends, among many other things.

Academy Winner Vanessa Redgrave to star in ABC’s Black Box
Acclaimed actress Vanessa Redgrave will be returning to American television in ABC limited series The Black Box, where she’ll be playing a psychiatrist.

The Bridge Renewed for Season 2 by FX
FX has given crime drama The Bridge a second season renewal, with the next batch of 13 episodes set to premiere next summer.

Grey’s Anatomy Season 10 Premiere Spoiler Alert
Check out a sneak peek of the 10th season premiere of Grey’s Anatomy where Grey + Sloan Memorial is running out of supplies and may have to shut down.

Army Wives Cancelled by Lifetime After Seven Seasons
Lifetime announced that it has officially cancelled Army Wives after seven seasons, though there’ll be a cast retrospective early next year.

The Goldbergs Series Premiere Recap: Can’t Fight This Feeling Anymore
On the series premiere of The Goldbergs, Barry doesn’t get the 16th birthday that he was expecting, while Pops causes a headache for Murray and Beverly.

Trophy Wife Series Premiere Recap: Thanks for the Ride, Dr. Pepper
On the series premiere of Trophy Wife, Kate has to adjust to a life with a husband whose past includes two ex-wives and three children.

Ravenswood Official Preview: The Guy Who Doesn’t Make It to the End Credits
The first preview of upcoming ABC Family mystery Ravenswood with new footage has been released ahead of its October 22nd series premiere.

HIMYM Premiere Review: The Journey to Farhampton
The final season of How I Met Your Mother began with a plane ride, Lily meeting the mother, and a familial connection between Barney and Robin.

How I Met Your Mother: Casting Scoop – Bryan Cranston Returns!
The Emmy winner will be resuming his role as Ted’s former boss sometime this season.

CW releases The Originals Debut Posters
Get a look at several character posters released by The CW in anticipation for The Originals, which premieres October 3rd.

Mistresses Renewed for Season 2 by ABC
ABC has given summer soap Mistresses, which stars the likes of Alyssa Milano and Yunjin Kim, a second season renewal.

HBO Renews Boardwalk Empire for Fifth Season
Boardwalk Empire, which was the most awarded series at this year’s Emmys, has been given a fifth season by HBO, which will premiere next fall.

Bob’s Burgers Renewed for Season 5 by FOX
Ahead of its fourth season premiere, Bob’s Burgers has been given a fifth season renewal by FOX.

Grey’s Anatomy season 10 Premiere Review: “Seal Our Fate”
On the season premiere of Grey’s Anatomy, Grey + Sloan Memorial deals with the aftermath of the storm and April chooses between Matthew and Jackson.

The Future of TV: How Do Networks Plan to Stay Competitive? (PBS Newshour)
PBS Newshour’s Hari Sreenivasan talks to Brian Roberts of Comcast about staying competitive and the legal battles with companies who stream TV for free.

Girls on Film: Hollywood should embrace women — just as TV has (The Week)
The Week argues that television has long surpassed the film industry in terms of its treatment of women – both on screen and off.

More Film Writers Switching to Television (TVWeek)
90% of respondents to a survey of the Writers Guild of America indicate that they’ll be seeking work in television within the next year.

The Difficulty of Defining Television Comedies in 2013 (The Atlantic Wire)
The Atlantic Wire takes a look at the state of comedy television in 2013, including how the lines between comedy and drama have become increasingly blurred.