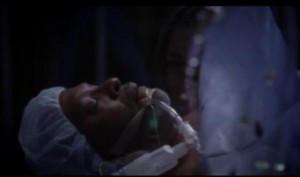 Finally, the wait is over and numerous assumptions put to rest. Grey’s Anatomy Season 10 premiere aired last night with a power-packed 2 hour episode, combining ‘Seal Our Fate’ and ‘I Want You With Me’. After the way things ended in the last season, was the opening really worth the wait? Read our review below and share your views too!

We know that things were pretty bad during the storm in Seattle and Grey Sloan Memorial worse affected. Well, for starters, we see an action-packed opening minus the drama where the hospital is coping up with the aftermath of the deadly storm. But, first things first, Bailey realizes the absence of Richard and asks Shane to go find him but, instead, a jealous Shane sends Heather to look for him. What happens next is tragic; poor Heather finds Dr. Webber and gets electrocuted herself, Shane Ross, thank you very much.

Moving forward the premiere delves into the most gripping two hours of Grey, we’ve seen in the past seasons. As Shane tries to save Heather, along with Dr. Shepherd, we can see that guilt his eating him up, but to our dismay, Heather dies. She was my favorite intern, but this was expected, at least Richard survives, or will he? Christina, Owen, Meredith (she is surprised to find out that she is Richard’s medical advocate!) and Bailey work hard to save Dr. Webber, but is he really fine? We’ll see that in the forthcoming episodes. However, we found the scene with Mer finding out that she is the one taking Richard’s medical decisions, very moving; indeed a significant move for her relationship with Dr. Webber. On the other hand, we totally adored the way Bailey and Yang fought to do what they feel is best to save Richard, because they love him so much. Overall, a great scene and very well enacted by Chandra Wilson and Sandra Oh!

So what happened with the couples in the premiere? Christina and Owen are missing each other and it feels good to see Yang acting like a wife, for a change. Catching us off guard, both of them confess that it’s not easy for them to stay apart, which leads to some great moments of passion. Is it the right way to say goodbye or is it goodbye yet? And then, we see that April’s feelings for Jackson are rushing back and she literally agrees to ditch her fiancé, to which he does not approve of. We are sure this won’t work out and hate to see her go back to marrying Matthew. Alex and Jo get together after they kiss and we are excited to see what’s in store for them in the coming episodes.

With so much going on with the old characters, it was kind of hard for us to focus on the plot with the firefighters. It was the most realistic and solid medical setup, but the guest characters were a little too much to take with so many things happening at the same time.

Some other scenes which cannot go without a mention are when a tearful-eyed Bailey asks Yang to thread Richard’s aorta and then they hug, Meredith and baby Bailey trying to make Alex feel better, that slight reminder of O’ Malley (God, I miss him!) and the interns bonding with each other.

Well, I give the premiere episode a 5/5; it was indeed a great start to an even greater season.

What did you think of the premiere episode? Rate it below.

The next episode of Grey’s Anatomy, “Everybody’s Crying Mercy” will air next Thursday, October 3 on ABC.