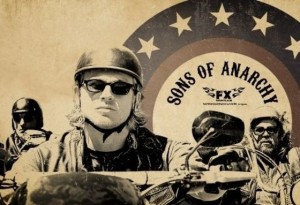 The FX Drama, Sons of Anarchy makes a remarkable comeback, topping the TV Ratings with 5.9 million viewers on its premiere night in 18-49 and other major demographics.

The Season 6 premier of the show got an all-time high rating on Tuesday, setting a splendid record of an average of 5.87 million viewers, which is more than the last year’s premier (5.37 million) and much more than the season 4 premier in 2011, which received a viewership of 4.39 million. The Kurt Sutter Drama, which is about a runaway bike club was the highest watched show on Television on Tuesday night!

According to FX, this premier episode of Sons of Anarchy’s Season 6, which also the second last season of the series, is likely to become the no. 1 rated single cast episode in the history of FX. This record can only be confirmed once the channel gets its Live+7 data in about three weeks from now.

The star audience of the premiere episode, majorly comprised of the adult demographic of 18-49 years, being more than two-third of the total viewers of the show. Sons of Anarchy also earned a rating of 3.1 from a viewership of around 3.94 million people of the same age group, much higher than a previous 2.8 and 2.5, in the previous seasons.