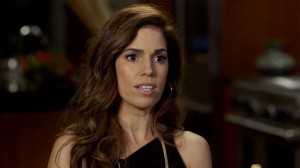 For the most part this season on Devious Maids, Marisol has managed to cover her tracks and avoid drawing suspicion from those around her. Granted, Rosie found out about her true identity after the run-in at the supermarket with her former student, but Marisol’s been able to gather information on what happened to Flora without much detection. A lot of sneaking around and a little too much lying, yes, though she’s been able to keep herself grounded in the investigation and self-aware enough to know when she was slipping away. However, she might have made her first major mistake of the season when she was caught eavesdropping outside Michael’s door, which Taylor informed him of at the hospital. Did Marisol’s famed “great advice” sink any chances she had of solving Flora’s murder and exonerating Eddie?

On the next episode of Devious Maids, Marisol has dug deeper into the investigation, only she’s now drawn Michael’s attention and won’t be able to move around the Stappord home as freely as she once did. In fact, she might end up being investigated in the same way that she’s been investigating others this season, possibly endangering her cover and her one shot to free her son. While Marisol pinged Adrian’s radar earlier this season during her stint working for the Powells, she was never in much danger around him, as he seemed more amused by what she was doing and the possibilities of who she could be vs. threatened by what she could find out at his home.

Michael is very different from Adrian, though, in that he has a well-respected career to lose and connections to not only Flora but information that could lead to her killer; he doesn’t want her poking her nose in where it doesn’t belong and shaking the foundation that his little community has been built on, especially when it comes to Remi and the two men who most closely knew Flora – the man who fathered her child and the man who sexually assaulted her, assuming they’re in fact two different people. How far will he go to steer her clue-sniffing in another direction or take her out of his home (and his life) once and for all?

Elsewhere on Devious Maids, Peri tries to get Rosie to forgive her for not calling 911, while Zoila continues to disapprove of Genevieve’s choice to marry Phillippe and Remi puts Valentina in a difficult position.

Do you think Marisol has gotten sloppier the closer she’s edged toward finding out who killed Flora? Will Rosie ever forgive Peri for what she did? Is there a chance that Genevieve will see the light and call off the wedding to Phillippe?