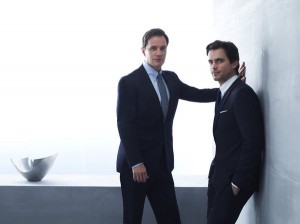 White Collar is out with the exclusive promo of their fifth season, scheduled to premier on October 17, 2013. The trailer of the crime/mystery TV Series of USA Network is named as ‘It’s time to rebuild’. USA announced the fifth season of White Collar on September 25th and also revealed to the White Collar fans’ dismay that this will be a 13-episode season, than the usual 16 episodes.

So what are the boys up to now? As the tag line of the show says “Sometimes it’s good to be a little bad”, in the promo clip, Neal Caffrey is trying to protect and support the FBI Agent, Mr. Peter Burke, who, we all know was framed for murder in the finale of Season 4. Neal suggests taking help from a con man, Curtis Hagen who is now a prisoner, a character which is played by the Supernatural fame, Mark Sheppard. In the clip, Neal says that it is just the beginning and he will make sure he cuts all of his strings.

The famous actor, Matt Bomer is all set for the brand new White Collar season as the con man Caffrey. Along with Matt, this season we will also see the Emmy-award winner, Zjelko Ivanek as a guest star of the show. Ivanek will be featuring in the eighth episode of the season as this ruthless businessman character who loves to indulge into unpleasant corporate takeovers and collect famous and important artifacts. He also gets chased by the FBI after having stolen millions of dollars’ worth fossil and egg of a Tyrannosaurus Rex.

We will also see, the ‘Outsourced’ actress, Rebecca Hazlewood as a celebrity guest this season. She will be playing the character of a paleontologist, Dr. Reva Khatri, who is the guardian at the natural history museum and gets robbed.

The latest trailer of Season 5 of White Collar gives a brief preview of the initial few episodes, including the one where Agent Burke is seen wearing prison clothes.

Watch the exclusive trailer of White Collar Season 5 here and share your views with us.