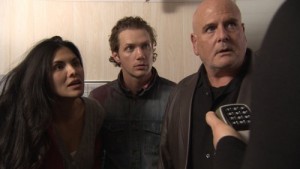 This week on TVHackr, we talked about a LeBron James sitcom, the final episodes of Siberia, and the first episodes of Back in the Game and Trophy Wife, while the internet touched on the most anticipated fall TV, what just hit Netflix, and TVs that were designed for outdoor usage.

NBC: Watch the Primetime Preview Special Here
NBC has released its annual Primetime Preview, a look at its upcoming fall schedule with assorted clips, which Sean Hayes and the cast of Sean Saves the World host this year.

Fox Sports 1 Up, Then Down In Opening Week
Just how did the new FOX Sports Network do during its first full week on the air? We have the verdict here.

Mistresses Season Finale Preview: Savi Finds Out the Paternity Results
While Savi finds out who the father of her unborn child is, April makes a decision about Richard and Karen faces off with Elizabeth one more time.

Siberia Finale Spoilers: Who Will Make It Out Alive?
Coming up on Siberia, the two groups of contestants are reunited after quite some time apart, but what is the latest danger threatening their lives?

Siberia 1.10 Preview: Where are Sabina, Neeko, and Miljan?
On the next episode of Siberia, the three contestants at the settlement are taken to their next residence, while those at the facility find evidence of experimentation.

True Blood to End After Season 7 in 2014
True Blood‘s seventh season, which will air during the summer of 2014, will be its last, HBO confirmed this week.

LeBron James Developing Starz Sitcom
NBA champion LeBron James has broken into the world of television, as he’s developing a comedy for Starz with Tom Werner and Maverick Carter.

Trophy Wife: Watch the First Episode of the Upcoming ABC Comedy Early
ABC released the first episode of Trophy Wife, which stars Malin Akerman as a former party girl who marries a man with two ex-wives and three children.

Back in the Game: Watch the ABC Comedy Pilot Early Here
ABC released the first episode of Back in the Game, an upcoming comedy that follows a former softball star moving back home with her father.

The Goldbergs: Watch the First Episode of the Upcoming Comedy Here
ABC released the first episode of family comedy The Goldbergs, set in 1985 and starring Jeff Garlin and Wendi McLendon-Covey.

Dancing With The Stars Season 17 Cast Revealed
The cast for the venerable ABC reality competition has been revealed. Who do you think is the favorite to take home the trophy?

Baby Daddy Season 2 Finale Recap: Happy Birthday, Miley
While Riley’s surprise birthday party doesn’t go quite as planned, Ben is in for a surprise of his own when he finds out that Emma’s mother is back in town.

Johnny Galecki a.k.a. Leonard ventures into Production
Big Bang Theory star Johnny Galecki has gotten into the production side of the television industry with a series in development at FOX.

True Detective to Premiere This January on HBO
The upcoming HBO crime drama, which stars Matthew McConaughey and Woody Harrelson, will premiere this January, along with the third season of Girls.

CBS Puts Entire Seasons of Selected Shows Online and On-Demand
CBS has made full seasons of The Good Wife, The Mentalist, Elementary, and Hawaii Five-o available before their fall 2013 premieres.

News Roundup: Women Making Strides on Television
According to a study by San Diego State University, women have been making incremental gains both in front of and behind the camera, though female characters are still outnumbered and tend to be younger than their male counterparts.

Defiance: William Atherton and Anna Hopkins Join Season 2
The Syfy drama has added two new characters for its second season: an E-Rep higher-up and a documentarian who gets involved in a passionate love triangle.

What’s New on Netflix Streaming This Month: September 2013 (Vulture)
Vulture has compiled a list of everything that hit Netflix this month, which includes the second season of Scandal.

TV.com’s 10 Most Anticipated New Shows for Fall 2013 (TV.com)
TV.com counts down the 10 new fall shows that they’re most excited about. Did your most anticipated series make the list?

Will the fall TV season be less gay? (CNN)
After a slew of gay-friendly series were canceled this past season, the fall of 2013 will be decidedly less diverse, ironically at a time when support for same-sex marriage is rising, per CNN.

The true stories behind 9 iconic TV production logos (The Week)
Want to know how Bad Robot, Mutant Enemy, and Ubu decided on their production logos? The Week has you covered.

How to End It All (Interview)
Interview brought together Vince Gilligan, Carlton Cuse, Damon Lindelof, and Alan Ball to talk wrestling with expectations, making television in the so-called Golden Age, and figuring out how to say goodbye.