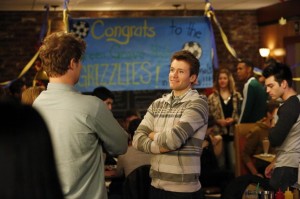 This week on TVHackr, we talked about fall premiere dates, a scheduling change for Mistresses, and the season finale of Baby Daddy, while the internet touched on male nudity, what shows to catch up on for fall, and the Video Music Awards.

2013 Imagen Award Winners Announced
Among the winners at the 2013 Imagen Awards, which celebrate positive portrayals of Latinos in entertainment, were Castle, Switched at Birth, and Chicago Fire.

The White Queen Episode 2 Recap: God Save the Queen
A pregnant Elizabeth is forced to deal with Warwick’s wrath, while the power balance in England has changed once again.

Teen Wolf Summer Finale Marathon to Air Monday, August 19th
MTV aired the entire summer season of Teen Wolf leading into the summer finale. The show will return for the second half of season three in January.

Siberia 1.07 Preview: Winter is Coming
The contestants must endure sudden winter conditions if they are to continue surviving the game, while someone has to be tied down in order to control their burgeoning insanity.

Siberia Spoilers: The Contestants Look for the Missing Rifle
Coming up on Siberia, the contestants back at camp go on the hunt for the missing rifle, while those headed for the beacon make a horrifying discovery.

Twisted Summer Finale Sneak Peeks: Lacey Feels Shunned By Her Friends
Now that Lacey has been frozen out of the popular circle she’s been in for the past five years, will she allow herself to be seen with Danny and Jo in public?

Baby Daddy Season 2 Finale Spoilers: Emma’s Mother Comes Back
On the season finale of Baby Daddy, Ben will come face-to-face with Emma’s mother for the first time since their night together when she makes a play for custody of Emma.

Mistresses 1.11 Preview: Will Alex Break Up with Joss?
While Joss faces the music for a questionable decision she made, Karen’s deposition begins and April is forced to be around Richard for Lucy.

Devious Maids Spoilers: Adrian Propositions Rosie
Coming up on Devious Maids, Rosie wants Spence to defend her honor after being propositioned by Adrian, while Marisol gets closer to finding the truth about Flora’s murder.

Power: Omari Hardwick Joins the Upcoming Starz Drama
Starz has named Omari Hardwick the lead in its upcoming drama Power, about a nightclub owner who is the kingpin of a lucrative drug operation.

Mistresses Moves to 9:00 Beginning Monday, August 26th
ABC has shifted freshman soap Mistresses up an hour, where it will air the final three episodes of its first season.

Homeland Season 3 Key Art: Stuck in the Middle with You
In the key art for the third season of Homeland, Carrie is stuck between her mentor and her former lover, the most wanted terrorist in the world.

Scandal Season 3 Poster: Everybody Knows
In the key art for the third season of Scandal, Olivia is regrouping after having her biggest secret splashed across the front pages of tabloids.

Experience the Past Three Decades Through These MTV VMA Photos (Vulture)
In anticipation of the 2013 MTV VMAs, Vulture looks back at past ceremonies with a collection of photos.

The Knowns and Unknowns of Web-Based TV (TIME)
TIME examines the world of web-based TV, including the players involved, the big bundle dilemma, and why all of this matters in the first place.

The Great Fall TV Cram, 2013 Edition: 10 Shows to Catch Up On Now (TV.com)
Are you looking to add another show to your schedule? Did you fall behind watching one of your favorite? TV.com gives you 10 shows that you should be caught up on and instructions on how to do so.

Apple Still Can’t Figure Out How to Break Into The Television Market (Business Insider)
Reportedly, Apple isn’t sure how to break into television and is considering approaching content providers to do applications for an Apple television.