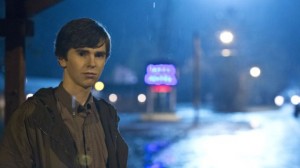 According to TVLine, Bates Motel has added two additional characters for its upcoming second season. Boss alum Kathleen Robertson will join the drama as savvy businesswoman Jodi, though it’s as-yet-unclear what her role in White Pine Bay will be, while Michael O’Neill (Grey’s Anatomy) has signed on to play Nick, the vengeful father of dearly departed Miss Watson.

What should be interesting to see is just how long it takes before Nick gets to work on getting his revenge for the death of his daughter. Norman isn’t exactly an expert at covering up a crime scene and committing a “perfect murder,” especially given his mental state at the time of the act, but the White Pine Bay PD’s ineptitude could buy him some time to figure out what happened and how he can protect himself from the impending fallout. Once word gets out of what happened, though, he’ll instantly become an even bigger town pariah, leading to his life being in danger. Will he be able to shield himself from the town’s anger if he’s revealed to be the killer?

In addition to her role as Kitty O’Neill on the Starz political drama, Robertson has appeared on the likes of Flashpoint, Rookie Blue, and Beverly Hills, 90210. Meanwhile, character actor O’Neill’s TV credits include everything from Rectify to Vegas, Fringe, and Army Wives. They join a list of new additions to the A&E drama that includes Michael Vartan as George, a man who develops a crush on Norma; Rebecca Creskoff as Christine, a White Pine Bay socialite and Norma’s first ever female friend; Kenny Johnson as Norma’s brother Caleb; and Paloma Kwiatkowski as party girl Cody, who teaches Norman about the value of dulling your inner pain.

The second season of Bates Motel is set to premiere sometime in 2014.

Will you be watching Bates Motel next season? What type of role do you think Jodi will have in season two? How long will it take the town to figure out that Norman was the one who killed Miss Watson?