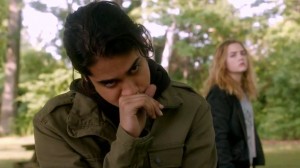 After having his friends in his corner for much of the season, Danny blew his last Green Grove social connections when he didn’t come clean about the necklace until last week’s episode of Twisted. Both Jo and Lacey feel as if they’ve had to put themselves out there time and time again, either at the risk of their relationships with their family or their personal reputations, so for Danny to hold on to something like that is almost like a direct insult toward them. If they’ve been able to stick by him to this extent, they feel as if he should put all his cards on the table so they can have the best view of the case against him that they can, in order to better prepare themselves and give their search for evidence some direction, or bail before becoming too invested in the murder investigation’s outcome.

On the next episode of Twisted, Danny is now facing possible expulsion after Coach Chandler takes the blame for covering up the soccer team poisoning scandal. As such, Regina’s mother leads the charge to expel Danny, which seems all but certain once Tyler tells Jo that no one he interviewed for the documentary could say a positive thing about her friend. Not helping things is that Lacey is still extremely put-off by the fact that Danny had the necklace, to the point where she starts wondering if he did kill Regina after all and has been playing her this entire time; as much as Jo loves Danny and believes that he’s innocent, even she can’t defend him anymore, not when he refuses to tell her why he killed Tara and now when he continues to be dishonest about certain aspects of the investigation. Even if he does manage to stay in Green Grove High through some minor miracle, will Danny be able to win back his friends and continue building evidence that he wasn’t the one who killed Regina Crane?

Elsewhere on Twisted, Rico scrambles to stop the spread of the video taken of Danny and Lacey the night Karen confessed, while Kyle learns of a connection between the Desais and City Hall and that the mayor has hired another investigator to look into Regina’s murder.

Do you think that Jo and Lacey should stick by Danny now that he’s facing a possible expulsion? What would be the ramifications if the video leaks to more than just Rico? Is there a chance that Kyle will be removed from the case if he can’t provide the answers that the mayor is looking for?